Manager says his players are focused on FAI cup, but is proud club has come even this far 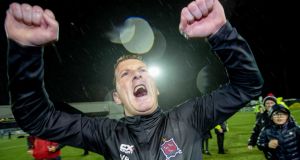 Dundalk’s manager Vinny Perth celebrates his side winning the league with a victory over Shamrock Rovers on Monday. Photograph: Morgan Treacy/Inpho

With two-thirds of the task in hand, Vinny Perth says that he and his players have been talking about doing the treble since well before the season started. But, not content with that, the Dundalk manager is also eyeing up the cross-border competition that has been dreamt up since then, with the club now set to wrap up their season with two games against Linfield in early November.

“We’ve never hidden away from the treble,” says the Dubliner, “certainly haven’t hidden away from discussing it. We spoke about it in preseason. Winning the treble is something that we focused on at the start of preseason because we set high bars here, although by winning the league title we have achieved the goal that was set for us by the club and the owners.

“The good thing for us now is that with the League and League Cup in the bag, with us having our place in Europe, the pressure is off, we can enjoy these two [the FAI Cup and] the all-Ireland [Unite the Union] cup too; we are going to go after that competition.”

Dundalk will face Linfield over two legs (away on November 8th; at home three days later), with the winners taking the latest incarnation of the “champions of all Ireland” crown plus the €50,000 in prize money that goes to the winners. Clearly, though, the priority before that will be the FAI Cup, which carries with it the chance of becoming the only side after Derry City in 1989 to win all three domestic trophies and, well beyond it, Europe next summer when the financial rewards on offer will be of an altogether different magnitude.

Perth, though careful to pay tribute to the many others around the Dundalk set-up who have contributed to the club’s success so far this season, admits he is very proud to have come even this far.

“I know the history of this league well,” he says. “People like Pat Fenlon, Stephen Kenny, Jim McLaughlin, Pat Dolan . . . they’ve all won leagues and you sort of join that list, which is a massive honour for me.”

Still, he contends, the group is on the verge of something far more significant again. “They [the players] have the opportunity now to achieve something that has only ever been done once before by a very famous club [Derry], a very famous manager [Jim McLaughlin] and a very famous bunch of players [the likes of Felix Healy, Liam Coyle, Mick Neville and Paul Doolin]. So let’s a have a crack off that now.”

The state of Oriel Park is certainly an issue, evidenced by the fact that Monday’s game attracted just 3,600 or so

With Sligo to come on Sunday, then Rovers again or Bohemians in the final, he must rather fancy their chances. Beating Linfield on top of that would be a bonus, although he will already be turning his attention by then to the challenge of how to strengthen in order to make more of an impact in Europe.

There are certainly those who feel that Perth’s first crack at that in his own right might have gone better, but the notion that a club that had a wage bill of €1.8 million a couple of years ago – and has maintained much the same squad over the couple of seasons since – can actually expect to do well on more than an occasional basis in competitions where opponents often spend a multiple of that, seems fairly unrealistic.

Budgeting to succeed in Europe is a major gamble without a far sturdier business model at home, and though the demeanour of chairman Mike Treacy after Monday’s game clearly suggested he has developed an emotional attachment to the club, he has made no secret of the fact that he and the rest of the American ownership group are intent on turning a profit. That is unlikely to happen by building a squad focused on what might be no more than six games a year.

The club’s CEO, Mark Devlin, touched on one of the issues in his programme notes on Monday when he suggested that the redevelopment of Oriel Park any time soon is unlikely, and that the club would explore the possibility of moving into the new 14,000-capacity GAA stadium to be constructed on the edge of the town.

The state of Oriel is certainly an issue, something evidenced by the fact that Monday’s game attracted just 3,600 or so spectators despite the scale of the occasion, and by the ongoing need to move bigger European games to Tallaght.

The owners show little appetite for redeveloping the place themselves, though, and it is hard to imagine how it could be justified financially without substantial outside support, but the GAA ground hardly sounds like the ideal solution, even assuming the option were actually on the table.

The club is, at least, daring to dream on all fronts but, without hefty investment, continued domestic dominance – wonderful as that must be for all concerned – may be its most achievable ambition for the foreseeable future.