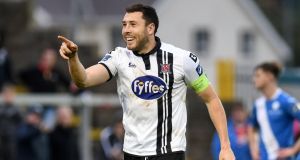 Cork City’s wait for a first League of Ireland Premier Division title in 12 years keeps going on and on.

Defending champions Dundalk beat relegation-threatened Finn Harps 2-0 Ballybofey to stretch out the title battle until at least next Friday when Cork can finally seal the issue if they beat Bohemians at Dalymount Park.

Captain Brian Gartland paved the way for victory with the opener midway through the second half and Jamie McGrath fired in the second with the last kick of the game to leave the champagne on ice yet again down Turner’s Cross way.

“It was important for us to get this win,” Dundalk boss Stephen Kenny beamed afterwards.

“It was never comfortable and it was a real battle. It was a really tough physical encounter on a pitch that was not in good condition.”

“Now we have to dust ourselves down and look forward to the cup semi-final replay against Shamrock Rovers on Tuesday. We want to be the first team from Dundalkk to get to the Aviva three years in a row.”

Kenny’s charges were odds on to beat the Donegal side in this televised encounter.

The Lilywhites had knocked 18 goals past Harps without reply in their five league meetings since the Donegal club got promoted.

On an energy-sapping, heavy Finn Park surface, Dundalk’s first attack of note came on five minutes when Dylan Connolly sent in a cross which was met by Robbie Benson who headed just wide.

But Harps matched them well early on with the ever-resourceful Paddy McCourt initiating a number of attacks and the energetic Eddie Dsane up front impressing.

However, Ciarán Gallagher was called upon to make a fine save on 18 minutes as he went full stretch to deny Thomas Stewart from firing the Louth side ahead after good work by Connolly.

Harps missed a glorious opportunity to take the lead on 23 minutes when Seán Houston did the spadework to set up Dsane inside the box but he somehow screwed his shot wide with Gary Rogers well beaten.

Dundalk showed renewed vigour after the interval and Gallagher had to save from Seán Gannon and Thomas Stewart.

They broke the deadlock on 66 minutes with captain Brian Gartland rising to head home a McGrath corner that had been conceded following an incident in which Harps had felt they should have been awarded a free.

Kilian Cantwell had a header saved by Rogers on 82 minutes as gallant Harps searched for an equaliser but Dundalk scored in the last of five minutes of stoppage time with McGrath’s delightful strike from just inside the box.