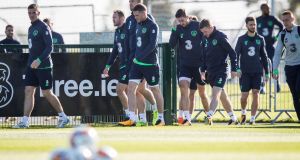 Ireland arrive for training on Friday ahead of their crucial double header against Moldova and Wales. Photograph: Ryan Byrne/Inpho

Martin O’Neill, it seems, will not be going anywhere when this qualifying campaign is over. We still don’t know about his team but John Delaney, the manager has confirmed, no longer sees the two issues as inextricably linked. If the next four days go as badly as the year has to date, that just might make for a lively debate in the wee hours of Monday night and Tuesday morning.

The northerner had been tight-lipped in the face of repeated inquiries about his future of late but chose Thursday’s pre-match press conference to reveal that he has spoken with Delaney and that “there’s a willingness on both sides”.

He subsequently went further in an interview issued last night through the association’s own social media accounts, revealing: “I spoke to John very recently and he said on behalf of the board he would like to extend my contract for another couple of years, and I’ve agreed to do so.”

It appears that nothing is signed but that O’Neill and all of his backroom staff, Roy Keane included, have indicated their willingness to stay on, with the detail of their new deals still to be finalised.

“I’m delighted,” said O’Neill, “Obviously qualification for the Euros made it all worthwhile and we’re still in this competition also.”

How long Ireland are in this competition also remains to be seen; the worst-case scenario being around 9.30 on Friday evening, with a loss to Moldova combined with a win for Wales in Tbilisi spelling the end of the road for O’Neill side.

Clearly, the manager and his players would be expecting rather better than that and are sure to be focused on the possibility of qualification. The possibility of Ireland coming up short seemed to be on Delaney’s mind six weeks ago when he told journalists, in reply to a question about whether O’Neill’s contract would be renewed before the end of the campaign: “We’ll leave that aside until a clear picture evolves on whether we qualify or not. It’s logical to leave everything until all the games are complete.

“We’ve got two big matches coming up,” he continued. “Let’s just all focus on Tbilisi and Serbia at home and take it from there. We’re looking forward to seeing how September goes. We could win the group, finish second for a playoff, third or fourth, it’s still very open.”

It is not quite clear those September results – a draw in Georgia and a loss at home to Serbia – could have so altered that timeframe, but they did pretty much narrow Ireland’s prospects to second or third place in Group D, only one of which carries even the possibility of progression.

After what has thus far been a tough 2017, though, engineering an escape act now would go a long way towards restoring the mood that accompanied the best results – Germany, Italy, or Bosnia and Herzegovina – of his tenure.

He regularly alludes to those and mentioned his 100 per cent success rate in qualifying on Thursday, but failed to acknowledge that none of his predecessors had had the luxury of the team finishing outside the top two and still getting a play-off place.

A big, convincing, slightly stylish defeat of Moldova on Friday evening would, in any case, tee things up for Monday rather nicely but, in the circumstances, a ground-out victory against a side that, like Ireland, drew in Tbilisi, will surely suffice. The least that is expected now, though, is that this thing will be settled in Cardiff.

Friday night’s opponents cannot be discounted, but that does not mean that they should not be beaten. The squad is largely made up of players drawn from the local league’s clubs and though some St Patrick’s Athletic supporters may still have nightmares about Zimbru Chisinau, O’Neill should have enough at his disposal to safely secure the three points.

With James McClean, Robbie Brady (both suspended) and Jon Walters injured, the home side is a little shorthanded in attack, though. Shane Long seems set to retain his spot up front and Jeff Hendrick is bound to return, but O’Neill’s other selections will be interesting.

Callum O’Dowda got a hugely positive mention on Thursday and Daryl Murphy must be in with a shout of starting given his goal return at club level, but Wes Hoolahan and Aiden McGeady look the more likely to be entrusted with opening up a defence that the Welsh, for all their problems since, dismantled comprehensively enough on home soil in their opening game.

The manager may also shore up his defensive base by bringing back in one of the holding midfielders dropped last month in the wake of their poor performances in Tbilisi. Glenn Whelan started that 1-1 draw as captain and yet somehow Harry Arter, with his greater ability to turn defence into attack, seems the more logical option if he really is completely fit again.

James McCarthy might yet feature on Monday but it is hard to imagine he would be risked on Friday evening, although O’Neill suggested that he will not be holding too much back for what might be considered the bigger game of the two, observing that “if we win this match, other things take care of themselves”.

There are quite a few things to worry about all right, with even a win in Wales not entirely certain to resolve things in Ireland’s favour. Any less than one this evening, though, and there can no complaints about not getting to travel next summer.