Staged construction of the 10,000 capacity ground would cost in region of €20 million 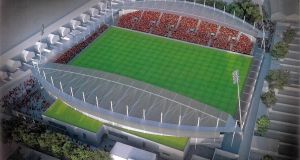 An artist’s impression of the new Dalymount Park which would include a new realigned artificial pitch and two new stands.

Dublin City Council has produced detailed plans for the new Dalymount Park with a realignment of the pitch and a staged construction envisaged for a project that would have a total budget of €20 million.

Under the plans, which would involve Bohemians playing elsewhere for a period, most likely a season, the new ground would be developed in phases with the first phase to include the laying of the new, artificial playing surface and construction of the main stand.

This would be along the St Peter’s Road end of the ground and contain 4,500 seats as well as club offices and other facilities for Bohemians along with the proposed football museum or “Hall of Fame” visitor attraction as it is described in the council document.

There would also be meeting rooms for local community and youth groups as well as a warm up area and space for other activities.

It is envisaged that some of the land freed up by realigning the pitch would be used as a civic space that would also serve to open up the ground on to Phibsborough Road through the redeveloped commercial area.

“Obviously, it’s a project that could be done in phases,” says DCC assistant chief executive Brendan Kenny, “and that’s something we have looked at. We have done a feasibility plan and other work but we haven’t got the funding at this point in time. If that became available we could go straight to planning.”

The design for the stadium itself (drawn up by award-winning architects Gilroy McMahon, who previously worked on Croke Park, Cusack Park in Ennis and the Markets Field in Limerick) is striking and the council’s plan impressive with the new stadium set to be available to: “different sports, new clubs and community groups”.

Clearly, though, the far more intensive use of the space – it is envisaged, for instance, that the pitch will be used by St Peter’s school as well, it seems, as the new Dublin Institute of Technology in Grangegorman amongst others – is likely to impact on anchor tenants Bohemians. The position of Shelbourne, who have long been looking at the possibility of sharing the new facility, has yet to be resolved.

Department of TransportTourism and Sport

Another of the constituency’s outgoing TDs, Joe Costello, last night said funding required for the first phase, believed to be around €8 million should be provided by the Government.

“It’s to be welcomed that the council has purchased Dalymount and the plans for it can serve as a blueprint not just for Bohemians but the League of Ireland as a whole,” he said.

“It will help clubs and help communities, it’s a win-win, and in the case of Dalymount the council has taken the first step, now the Government should get firmly behind the project.”

The FAI has pushed for the Dalymount redevelopment as a “legacy project” of Dublin’s involvement in the staging of Euro2020. It is envisaged that some under-21 internationals and other games of significance would be staged at the venue.

During the boom, Bohemians had agreed to sell the stadium and move to a green-field site close to Dublin Airport.

But the plan collapsed when the economy crashed and the club got into severe financial difficulties with the purchase by DCC last year helping to clear substantial liabilities which had been amassed.