Derry put Europa League humiliation behind them with 4-0 win 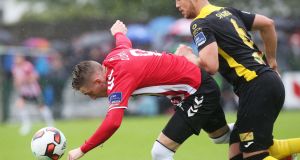 And the comprehensive victory sees Kenny Shiels’ men move closer to both Shamrock Rovers and Bray Wanderers in the top four, boasting the benefit of a game in hand.

With Derry totally in control at Maginn Park, Sligo struggled and but for the performance of their overworked ‘keeper, Michael Schlingermann, Derry would have won by more.

At the rain-soaked Buncrana venue, Derry started slowly but any thoughts of tired limbs after their games against FC Midtyylland were dismissed once the deadlock was broken in the 32nd minute.

Aaron McEneff picked up a pass from Rory Patterson and while Schlingermann did well to parry the ball into the air, the well placed Lukas Schubert was on hand to head home from close range.

Derry never looked back with the visiting ‘keeper forced to put in a sterling performance.

After the break, Derry refused to sit back and surged forward from the restart in search of that vital insurance goal.

With Sligo offering very little - the home ‘keeper Ger Doherty was never in the game - Derry deservedly doubled their lead in the 62nd minute when Ronan Curtis drilled a low shot into the net having controlled a Nicky Low cross on his chest.

In the 74th minute it was 3-0 when Ben Doherty was clearly upended by a defender inside the danger area and McEneff confidently found the corner of the net from the penalty spot.

With the points now secured, the home side added a fourth when substitute, Rory Holden, netted his first senior goal. Having set up the move himself he raced forward to take a Patterson flick-on in his stride and after outwitting two defenders, the 20-year-old found the net despite Schlingermann getting a touch.