Danny Grant not giving up on Bohemians’ title chances 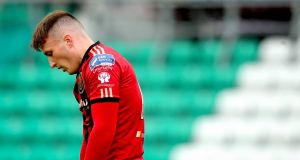 Danny Grant is determined his team can bounce back from their derby defeat to Shamrock Rovers. Photograph: Inpho

Bohemians midfielder Danny Grant is not giving up on the club’s title chances just yet but accepts they must get back to winning ways against Waterford on Friday evening after the disappointment of last weekend’s defeat in Tallaght.

The 20 year-old who was named as the Airticity/Soccer Writers’ Association Player of the Month for August - after a run of wins that took his side to within two points of top spot - insists that Shamrock Rovers can still be caught. But the Dalymount outfit need to focus first on beating a Waterford side that returned to form last time out with a 3-0 win over St Patrick’s Athletic.

“We weren’t expecting to be in a title race when we came back, to be honest, but before last week there was only two points in it so it was a massive game and yeah, we’ve analysed it and it was a disappointing performance. But we just have to bounce back against Waterford, it’s all we can do really.

“They’ve got good attacking players, solid defensively, probably more of a counter attacking team but they are doing really well since they’ve come back, they’re winning most of their games so we respect them. It’s going to be a very tough game.”

Rovers, he acknowledges, are “clearly in the driving seat now,” and any slip up would only strengthen their position but as things stand, the Dubliner maintains, even Dundalk could play their way back into things if the league leaders lose their way for a couple of games.

The 20 year-old’s form was one of the key factors in Bohemians’ run of five straight wins last month and he spent the international window at an under-21 training camp which he feels can play a part in helping with his ongoing development.

“It was good,” he says of the few days away working with Jim Crawford and the rest of the Ireland squad.

“The standard was very high. The lads are really, really good players. Some of them are playing in the Premiership, the Championship, Scotland. We played a training game as well and the intensity of that was really enjoyable.

“Obviously they are similar ages to me but a lot of them are a step ahead in terms of their careers so I can learn a bit in terms of how they got there because obviously that’s probably a goal of mine, to go to England over the next couple of years.”

Dundalk host Shelbourne in the night’s other top flight game while Rovers head to Cork on Saturday afternoon looking to take another significant step towards a first title in almost a decade.

City, meanwhile, are trying to scramble towards safety at the other end of the table but face a tough week or so with last year’s champions to come after Stephen Bradley’s side.

“I think momentum-wise, a draw against Rovers would be a good result, in terms of going to play Dundalk with a bit of confidence,” says City boss Neale Fenn. “Would I take a draw now? Probably not. We want to go out and win the game.”

Irish Open 2020: Galgorm Castle hole-by-hole guide 06:00
Rugby Stats: Saracens superiority at scrum time key to victory over Leinster 06:00
Irish Open 2020: Four players to watch out for 07:01
Marty McGrath and Ederney hoping to bridge a long gap in Fermanagh 06:00
Sonia O’Sullivan: 20 years on and memories of that Sydney final flood back 06:00

1 Joanne O’Riordan: How Clive Tyldesley earned Roy Keane’s respect
2 Rugby Stats: Saracens superiority at scrum time key to victory over Leinster
3 Irish Open 2020: Four players to watch out for
4 Born to ride, born to win: Sam Bennett, the making of a green machine
5 Sonia O’Sullivan: 20 years on and memories of that Sydney final flood back
Real news has value SUBSCRIBE