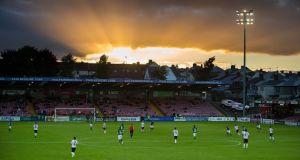 Cork City moved 18 points clear of Dundalk, with a game in hand, but their defeat of Galway United at Turner’s Cross was far from straightforward.

At the same venue in March, John Caulfield’s side had had a 4-0 win, but a 1-1 draw at Eamonn Deacy Park in May represented their only dropped league points to date. For three-quarters of the contest, it seemed that Galway might match that achievement as the hosts suffered a post-Europe hangover - as well as dealing with the departures of Kevin O’Connor and Seán Maguire to Preston North End. But in the end, City turned things around.

They had trailed 1-0 at half-time, former Rebel Army man Gavan Holohan with the Galway goal, and it wouldn’t have taken too much for the visitors to have been ahead by more, Pádraic Cunningham with a great chance to double the lead only for Mark McNulty to save well.

Not at their flowing best, with Karl Sheppard moving from the wing to fill Maguire’s space at centre-forward, City couldn’t work Conor Winn in the Galway goal. Their best chance came when Kieran Sadlier’s ball eluded the Galway defence and Stephen Dooley took it past Winn, but the ball ran too far wide for him to take a shot.

On the half-hour, Cunningham had a half-chance but found his effort was blocked after McNulty spilled Kevin Devaney’s shot, while at the other end Ryan Delaney’s delivery intended for Sheppard was well cut out by Lee Grace.

Within three minutes of the restart, it appeared that Ronan Murray had doubled Galway’s lead as he turned Devaney’s Cross in, but he had used his hand and was booked. After that let-off, City improved and, after Sheppard shot over, Garry Buckley levelled on 52 with a controlled, low 20-yard shot when a cross broke to him.

That provided a pressure release and more chances came. Dooley had a volley saved by Winn from Sheppard’s cross, then Beattie’s delivery was met by Buckley, and that needed an even better stop from the goalkeeper.

Half-time sub’ Achille Campion also went close with a header before the lead goal came, not without good fortune, in the 68th minute. Beattie was again the supplier, with Sheppard meeting the ball, but it came off Grace last to take it past Winn.

Buckley could have made it safe, but shot wide after a good run, while Sheppard also shot wide near the end, following a break from a Galway corner.

Those misses might have haunted City as Grace headed off the post at the death, but the points remained in Cork.

St Pats moved further away from the relegation zone with a hard fought win against Drogheda United on Friday night.

Christy Fagan’s first-half goal proved to be the difference between the sides as Drogheda now look all but condemned to the first-division next season.

The hosts started brightly with a long range shot narrowly missing the target inside the opening 60 seconds. Pats soon settled into their rhythm though. A Killian Brennan corner was met by Kurtis Byrne on the edge of the box and he hit the crossbar with an unorthodox volley.

Ian Bermingham played a loose pass which allowed Thomas Byrne to bear down on goal, but the youngster slipped at the crucial moment. From the following attack, Pats broke and Conan Byrne whipped in a low ball which Christy Fagan smashed off the crossbar.

The experienced striker made no mistake on 14 minutes however, when in a carbon copy move, Byrne provided the cross and Fagan finished with aplomb at the near post.

The visitors should have doubled their lead before half-time but Billy Dennehy’s header was cleared off the line by Lloyd Buckley.

Drogheda upped their intensity in the second-half and it almost paid dividends on the hour mark when Sean Russell crossed from the left and Thomas Byrne was unmarked in the box but just couldn’t connect.

Chances for the visitors were few and far between in the second period but Conan Byrne headed a ball down to Kurtis Byrne on the edge of the box and his shot was brilliantly blocked by Kane.

Adam Wixted forced an unbelievable save from Conor O’Malley in injury time as Pats held on for the win.

Finn Harps edged 10-man Bray in a rollercoaster game at the Carlisle Grounds, adding to a week to forget for the hosts.

After off the field drama dominated the build-up, the Wicklow side slumped to a fourth straight defeat. While Harps’ third win in four games moves them five points clear of the bottom three.

Though Bray enjoyed much of the ball, Harps’ direct approach brought its reward for their lead goal on 24 minutes.

A sublime through ball from Paddy McCourt found Eddie Dsane in behind right-back Keith Buckley. And the little striker made amends for an earlier miss to score with a rising shot from a tight angle, for his third goal in four games.

But Bray were poor at the back with Caolan McAleer latching onto a stray pass to run on and drill a shot wide, before Peter Cherrie saved well from Sean Houston.

Further dreadful defending saw Harps increase their lead right on 45 minutes. Bray skipper Conor Kenna handled a McAleer shot on the edge of the area, allowing new signing Mark Timlin a free kick, which arrowed straight through the wall to the net with Cherrie rooted to the spot.

Though top scorer Gary McCabe didn’t appear for the second half, Bray had more impetus with Flood working Gallagher either side of penalty shouts for what looked like fouls on Brennan and Keith Buckley.

But the initiative swung back Harps’ way on 63 minutes when Cherrie was shown a straight red card. McAleer’s delightful ball put Dsane in the clear with Cherrie taking him down outside the area leaving referee Anthony Buttimer with an easy decision to send the ‘keeper off.

The impressive Boyle whipped a cross in from the right and substitute Ibrahim Keita, on the pitch less than a minute, glanced his header home for his first goal of the club.

Brennan volleyed to the net following an 87th minute corner to give Bray late hope, though Harps held on.