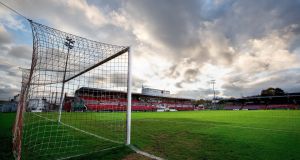 Members of Cork City supporters’ group Foras will vote in an online meeting this evening on whether to back a proposal from the board that the club be sold for the nominal sum €1. If the deal is approved, Grovemoor, a company controlled by Preston North End’s billionaire owner Trevor Hemmings, would take over the club and its debts, which are put at about €200,000.

The proposal, which requires a simple majority, is widely expected to go through. The board’s recommendation has divided members but even some of those who are opposed to the idea seem to believe there is little alternative in the current situation while others, who intend to vote against, accept they are likely to lose.

Club chairman Declan Carey acknowledges that the plan has generated strong reactions among members who have taken considerable pride in the way their supporters’ group saved the club then steered it to very considerable success.

A sudden decline in the fortunes of the first team, which had won the double just three years ago, and a couple of bad years financially had prompted a crisis at the start of this season, however, and City’s recently confirmed relegation to the First Division means another one is looming, he suggests, if fresh backing is not secured.

Grovemoor’s involvement stems from events late last year when the club was forced to cash in sell-on clauses for Seani Maguire and Alan Browne with Preston for €450,000 then go back seeking additional funds in order to meet a Revenue demand. Another €150,000, it is widely reported, was secured but on condition that the Hemmings-owned company got first refusal on a full takeover if Foras ever considered relinquishing control.

“We are all supporters but the board is unanimous in believing this is the best way forward,” says Carey who, like all of his fellow directors, is an unpaid volunteer. “It’s been a tough year but it’s not that we have suddenly grown sick of this, it is that we believe that in the current environment it is the best way of steadying things now and building for the future.

“As things stand we couldn’t even be sure of being successful in the First Division. Other clubs in it have benefactors. They [Grovemoor] want to get the club back into the Premier Division and competing; they want to invest. I firmly believe that he [Hemmings] has the best interests of the club at heart.”

Others remain more sceptical, pointing to the lack of a clearly laid out manifesto for how the new owners might seek to realise what is regarded by many as City’s untapped potential or even any direct communication from the would be owners.

Grovemoor was not represented at the information meetings held to brief supporters of the issues involved and though a statement from the company will be passed on to Foras members this evening, there is unhappiness over the lack of clarity and a feeling that too much is having to be taken on trust, something that was in short supply in the post Arkaga and Tom Coughlan days.

“I accept that people are divided over that but the supporters were already divided over how they view the club. For some, it’s absolutely about how the club gets back to competing for honours but others would be happy enough to see the club plugging away as long as they can go along and see a game then go for a few pints with their friends.

“For us, as directors, we look at plans to improve different areas of the club, whether it’s merchandising or the academy [a possible attraction for Preston, post-Brexit] and realise that we can’t really do any of it because of the lack of money. On top of that now, you have all the uncertainty over financing for next year because of Covid and we have staff to think about.

“I understand that people are wary after all that the club has been through but he [Hemmings] is not some wannabe entrepreneur or some faceless hedge fund . . . he has a long-standing relationship with Cork [through the ownership of Trabolgan holiday village and a couple of stud farms after having apparently holidayed there in his childhood]. I believe it’s better to hand over the club to someone like that who clearly has the money to take it forward again.”

About 560 members of Foras which, Carey is keen to stress, will continue to exist if the sale goes through, are entitled to vote this evening but he expects 300-350 to attend the online meeting. The vote will take place around 10pm but as there are also some postal ballots to be added, a result is not expected until tomorrow.