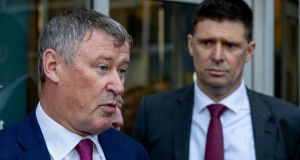 Gary Owens and Niall Quinn remain optimistic that substantial funds can still be secured from Government and Fifa to buttress a successful deal to restart the league. Photograph: Morgan Treacy/Inpho

Clubs were beginning to weigh the latest round of FAI proposals on a return to Airtiricty League action at board and other meetings on Friday night with formal responses due next week.

But there was no early suggestion of movement among those who have sought guarantees that resuming the season will not plunge them deep into the red.

In a statement issued on Friday evening, Cork City said that the club would: “take a period of time to examine and assess the information. We have an obligation to safeguard both the health and wellbeing of our players and staff, whilst also safeguarding the financial viability of the club, and this is the basis on which we will assess the information received”.

Gary Owens told clubs that substantially more than the €1.7 million, which would be paid in instalments, can still be secured from Government and Fifa but despite some apparent goodwill from politicians and positive noises from the international federation, they have still not been able to put any on the table.

On that basis, the proposal outlined included the pooling of prize and Uefa solidarity money, substantial contributions by the clubs expecting payment for playing in Europe and, potentially, the abandonment of the proposed four team tournament in order to avoid the cost involved. All of the money would then be redistributed, primarily on the basis of income estimated to have been lost.

The plan had initially been met with disappointment but Owens and Niall Quinn appear to be still hopeful that they can broker an agreement then go back to the board of the FAI with a more concrete proposal than the one rejected on Wednesday evening when an appeal for some €2 million in backing was rejected over a lack of detail and certainty.

There is said to have been a good deal of concern among members of the board that any concrete figure agreed to this week would have ended up being insufficient if the money came to be regarded as part of a starting point in negotiations between the two sides.

Minister for Sport Shane Ross said on Thursday evening the Dáil, however, that he would be “amazed” if the league does not receive public funds as part of a wider package for sport. But there is a belief that the Government does not want to commit money until progress with the pathway out of lockdown is more advanced and it is clearer what the different parties really need.

In the meantime, however, Sinn Féin’s Chris Andrews called for a “solidarity grant” to be provided to the league in order to get it up and running again with the Dublin Bay South TD arguing that a figure of between €1 million and €2 million would be justified on the basis of increased contribution to their communities that the clubs make these days.

With hugely different ownership structures, cost bases and prospects for revenue over what would remain of the season, there is very little sense of the collective spirit among the top-flight clubs that Owens and Quinn seem to have been hoping for when drawing up their proposal.

After a First Division meeting that kicked off with a majority of clubs insisting that Shamrock Rovers representative Shane Robinson withdraw, there seems to have been rather more on display with the others subsequently agreeing to share out evenly whatever funds the association puts on the table.

Under the terms of the arrangement initially on offer, that seems to run to about €40,000 per club although they would then forego the larger Uefa Solidarity payments that they would normally be due at the end of the year. The shortfall would be around €20,000 but with the European federation having eased the conditions it normally attaches to the solidarity money, spending on areas like underage teams might potentially be cut so as to address the difference.

With wages far less of a consideration in the First Division and the speed with which Government-imposed restrictions associated with the pandemic are currently easing, there is some optimism among the clubs that significant numbers of supporters might be allowed into games as early as late August and that would tip the balance in favour of a return.

There was a strong sense that the division could not return, however, unless there are promotion places at stake and with relegation a potential stumbling block to a return of the top flight, it seems possible that an expansion of the Premier Division back to 12 teams, at least for one season, might be one of the conditions sought by some clubs as the talks continue.