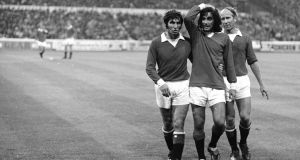 The Northenden golf club bar in Manchester was doing good business on the afternoon of May 16th, 1999 when silver-haired Tony Dunne walked in. A groan went around the room when he arrived but it was pure coincidence. Les Ferdinand had scored for Spurs on the TV in the corner to put them 1-0 up at Old Trafford, but that turned out to be just a pebble in the boot – “Lads, it’s Tottenham” – on the day when United clinched the first leg of the treble.

Dunne had little interest in the match, or in the two that followed, at Wembley and in Barcelona, to cap the most successful 11 days in Manchester United’s history. In fact he had just turned down an invitation to attend the match at Camp Nou along with the rest of the 1968 European Cup-winning team.

“It’s very nice when people say they remember you, and what a great player you were, but that’s over now – gone,” he told me in the interview for the Sunday Tribune. “We’re not part of it anymore and I don’t think we should sit there like 11 monkeys at the game just because we won it before.”

It seemed a particularly harsh and joyless sentiment for a bone fide club legend. Only seven men have played more often than Dunne’s 535 games for United, and no Irish player is among them. A versatile, hard-tackling and fearless full back, a handsome, blue-eyed Dub, Dunne was one of those who put the bubbles in Charlton, Law and Best’s Champagne. But in the bar on that May afternoon his glass never rose above half-empty.

Dunne died this week at the age of 78 and it was hard not to think of the hurt he expressed 21 years ago when United’s European Cup run put him back in the spotlight, where he didn’t like to be. The heightened emotion of those weeks in Manchester exposed a nerve that ran all the way to Dunne’s acrimonious departure from the club in 1973. Long before then, he felt that Matt Busby had reneged on a promise to “look after him” financially, and that the testimonial matches he ended up scrambling around for were a great and unjust humiliation.

“What an absolute fool I was all those years,” he told me. “What an idiot. I know I came from a poor background, but how did I ever fall for all that crap? It’s there – 530 games, a European Cup medal, but sometimes that’s not enough. You can do without all that if there’s that kind of real, genuine feeling between two people at the end. A genuine feeling that has been there all through that time.”

Playing for Busby could be, as Eamon Dunphy put it, a strange kind of glory. Dunne had signed for United from Shelbourne in 1960, two years after the Munich air crash. Dunne was 16 years old when the crash happened, working as a messenger boy on Dame Street in Dublin, and he could barely understand what had happened. “What I was wondering,” he recalled of Munich, “was what a football team was doing on an aeroplane.”

That deep well of innocence, together with his steeliness and playing talent, helped Busby mould him into what Bobby Charlton called the best left back in Europe. But it also led to a deeply unequal partnership in an era when clubs were the kingdom, the power and the glory, and retiring players were often left, boot bags under their arm, without a sustainable future.

Dunne went on to play for Bolton and Detroit Express in the United States and won 35 caps for Ireland. He didn’t enjoy going back to Old Trafford, and rarely did so. But in the years that followed, those bitter sentiments of 1999 appeared to give way to a more nuanced understanding of his time at the club.

Dunne’s feelings after his brilliant performance in the 1968 European Cup final against Benfica – mighty relief, rather than joy – seemed to encapsulate his lifelong struggle to articulate his special place in the club’s history.

It was for history, and for us.

1 Gordon D'Arcy: Ireland must go after victory by frightening France into mistakes
2 Robbie Henshaw likely to be the only Irish change for France finale
3 Seán Moran: Will a silent, empty Hill help to loosen Dublin’s grip on Sam?
4 Cork City expected to approve €1 takeover by Preston owner
5 Bartomeu resigns and drops bombshell of Barcelona joining European Super League
Real news has value SUBSCRIBE
Crossword Get access to over 6,000 interactive crosswords