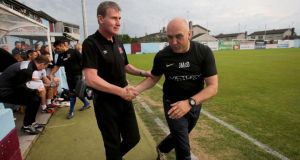 Dundalk will begin their Champions League campaign in Belarus tonight looking to become only the third team in history to beat BATE Borisov on their own patch.

BATE moved to the 13,000-seater Borisov Arena in 2014 and it has become something of a fortress. The Belarusian champions have yet to lose a domestic game at the venue and have won all nine of their home fixtures this term.

Their only losses have come in the group stages of the Champions League with Shakhtar Donetsk and FC Porto recording wins in Barysaw last season.

It is a daunting task for the League of Ireland champions but Dundalk manager Stephen Kenny believes his team are more than capable of rising to the occasion and says his players can take inspiration from last year’s Europa League victory in Croatia over Hajduk Split.

“We will have to be tactically disciplined and understand that the reason BATE haven’t lost at home in a few years is because they have good players and they have a certain way of playing.

“The Borisov Arena is not as hostile or as colourful as Split but it’s still an intense stadium. We just have to make sure we are are brave enough to play our game.”

As well as boasting a flawless home record, BATE have the meanest defence in Belarus. Aliaksandr Yermakovich’s side have conceded just four goals in 14 league games – three of which came in last Friday’s 5-3 win over Slavia.

Dundalk, however, have racked up 68 goals in all competitions this season and Kenny believes that his side are more than capable of returning home with a couple of priceless away goals in the bag.

“We know we are going up a level,” he said. “BATE won’t fear us and they’ll try to put us to the sword in the first leg. They won’t want to come back to Oriel Park with the tie still alive so, from our point of view, we have to make sure we are still in it and we have to believe we can score in Belarus. We definitely have the capacity to do that.

“BATE will be really disappointed if they don’t get to the group stages,” he added. “If they lost to us it would be catastrophic so there will be a lot of pressure on them,” he concluded.

Kenny said that Dundalk would give Andy Boyle every opportunity to prove his fitness. The centre back has been carrying a calf strain and 21-year-old Paddy Barrett is in line to make his European debut if Boyle does not recover.

1 CVC cuts Six Nations offer by half to €165m as talks continue on new deal
2 Jack Charlton era made GAA sit up and realise its greatest strength
3 Game Changers: Living beyond fear puts Alex Honnold above all others
4 Mikel Arteta warns Arsenal must invest significantly to compete
5 Georgia and Fiji in line to join Six Nations sides in eight-team tournament
Real news has value SUBSCRIBE