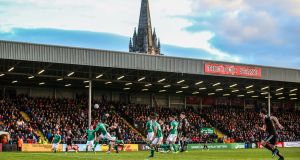 Bohemians have become the fourth League of Ireland team to commit to providing period products at their stadium. It follows Shamrock Rovers, Drogheda United and Derry City in doing so.

Speaking to The Irish Times, Daniel Lambert, Marketing and Commercial Director at Bohs said that the club “works on numerous social issues, and our overall aim is to make sports as inclusive as possible. There shouldn’t be any barriers to accessing sport, and this is an important step in that process.

“Thanks to Claire Hunt of Homeless Period Ireland for highlighting the issue to us. We’ve noticed an increase in the number of female fans and families attending our games, which is great. As a spectator, as a player, anyone involved with the games should be comfortable.

Comfort is key when it comes to periods. Studies have shown that girls tend to drop out of sport when they reach puberty, and this is “often because of embarrassment and in some cases, they simply don’t have access to products,” says Hunt. “It’s important that products are readily accessible at no cost, like toilet roll or soap. By increasing this visibility for female football fans, football clubs are showing that they are forward-thinking and inclusive.”

Change often stems from the grassroots and smaller clubs are also playing their part in making their grounds more accessible to girls and women. It’s clear that it’s not just something for the League of Ireland teams to consider. Granada FC of Blackrock, Co Dublin are also bringing in period products for players, parents and passers-by.

“We decided that it would be incumbent on us as a football club that if we’re going to be serious about girls’ football and ensure that girls have equal opportunities within the club that they feel comfortable being in and around the environment,” says Dave Paul, club secretary and coach for the under-12 girls. “As the girls in Granada are starting to get older – the ages here range from six to 12 – we want to normalise the fact that their bodies are going to be changing, that it’s not a problem, and that the club is fully on board with supporting them.”

Alluding to the studies showing girls dropping out of sport once they hit puberty, Paul says that Granada want to prevent this. “It’s normal. I have two daughters myself who play football, don’t want it to be a taboo subject. As a football club, we felt it was the right thing to do in our club.”

As Lambert said, “there’s no reason that it shouldn’t be standard across every sports ground in the country.”

“Football unfortunately can sometimes be painted as quite male-dominated and this is just not something Bohs is. We work with a range of different groups – including an LGBT and mental health one – to make sure we are doing everything we can to make everyone feel like a member of the club. The progression of the club should be for everyone.

“This is an important step to progressing the game to include everyone and we’re glad to be making the change.”