Structure and security essential to how Zidane views the game 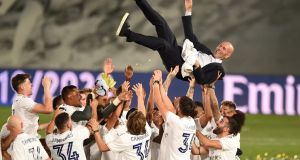 A long, long time ago, Manchester City beat Real Madrid 2-1 in the first leg of their Champions League last-16 tie.

It was a strange game in that while it was widely regarded as having been a tactical triumph for Pep Guardiola, evidence he could temper his philosophy, there was also a lingering sense Real were there for the taking and that City playing their usual game might have had the tie won there and then.

Still, there seemed little doubt City would advance but then Covid-19 intervened and today, 163 days later, City find themselves facing a very different Real, albeit one without the suspended Sergio Ramos.

It would be a glum irony if Guardiola, having finally tweaked his approach, ends up being eliminated in part as a result of a rare but apparently successful dabble with pragmatism.

With Guardiola it is always in one way or another about philosophy, with Zinedine Zidane it is always about its absence. The tendency, perhaps, is to underestimate Zidane as a manager, despite his three Champions League triumphs and two of the three La Liga titles Real have gathered in the past decade.

We have become used to managers being proponents of an ideology. There is Guardiola, with his juego de posición, all angles and sanctimony. There is Jürgen Klopp with his gegenpressing, his booming laugh and terrifying energy. Here comes José Mourninho, the prince of darkness, glowering and snarling and trying to remember how to disguise his malevolence with charm.

There, in the black, Diego “Cholo” Simeone, practising the ancient arts of anti-fútbol as taught to him as a child on a dusty field in La Plata by the old man for whom they invented the term. And look, over in the corner of the coffee shop, there is the most implausibly charismatic man ever to have worn a baggy tracksuit, Marcelo Bielsa, with his numbers and diagrams and frequently self-defeating idealism.

Zidane is none of those things. He apparently has no defined philosophy. He is flexible – and he wins. There is no sense he is pushing against the limits of the game’s possibilities. He has left no mark on its tactical evolution. He was dismissed at first in Spain as a clappy-hand manager, somebody who just kept the dressing room happy and occasionally gave some mild encouragement from the bench.

Yet, for all it has felt he has occasionally been fortunate, that his timing has been propitious, that he has been working with one of the most expensively assembled squads in the history of the game, that is an inadequate way of explaining his success.

A simple measure of his influence is how frequently his substitutions have turned games for the better. There was a period between February and April 2017, during his first full season in charge, in which Real fell behind in seven out of 12 games, but went on to win six of those and drew the other. It was ridiculous madcap stuff. It suggested a basic inability to control matches and was clearly unsustainable but Real did keep coming back and they did find a way to assert control.

Zidane this season has been all about control. After lockdown they won 10 in a row and drew the 11th. In the first eight of those games, when there was still at least a theoretical risk Barcelona might get back into it, they let in only two goals. City, clearly, will pose a far sterner test but perhaps what we are seeing from Zidane’s Real is a return to a more traditional style of football, one that prioritises defending.

It is a deeply unfashionable way to play for a superclub. Others prefer to blaze away, demolishing domestic rivals with far inferior resources and then take that approach into the Champions League where their attacking football prevails until it meets another superclub playing similarly attacking football, when the result is frequently thrilling chaos. That is one of the reasons the latter stages of the Champions League in recent seasons have been so enthralling, why two- and three-goal leads have often been overturned.

But however exciting the product it has meant for two or three years there was an advantage to be gained for the first of the superclubs to remember how to defend. Klopp hinted at that after Liverpool’s 0-0 draw at home against Bayern Munich last season, and one of the major reasons for Liverpool’s triumph in the Premier League is that they defended better than City.

Zidane has changed formation and style frequently but certain tenets have remained consistent, particularly more recently. This is an oversimplification but essentially he looks to keep things tight and then waits for one of his brilliant attacking players to do something.

Perhaps it should not be a surprise this should be the approach Zidane has taken. As a player, he won the World Cup under Aimé Jacquet in a side who had a holding midfielder and two shuttlers sat in front of the back four. At Juventus he played under the pragmatic Marcello Lippi and the chameleon Carlo Ancelotti.

His time as a player in Madrid was during the galáctico era when managers never lasted more than a season but none of Vicente del Bosque (at that stage), Carlos Queiroz and Vanderlei Luxemburgo were advocates of a high press. Queiroz, in particular, is risk-averse.

Zidane was moulded in the France that produced Didier Deschamps, whose formula to win the World Cup was essentially solidity plus Kylian Mbappé (which felt needlessly restrictive given the depth of talent in that squad). Last summer, he appointed Deschamps’ conditioning coach, Gregory Dupont, nicknamed McGregor (after Conor) for his meticulous approach to fitness.

Zidane, unusually among elite managers, has never come under the influence of a Cruyffian, or a Bielsista, or the German school of pressing. Why then, would he aggressively press? Why would he not also be conservative. When Claude Makelele was sold to Chelsea in 2003, denying Real their midfield base in order to facilitate the signing of yet more glamour, it was Zidane who was publicly critical.

Structure and security are essential to how he views the game. It may not fit fashionable notions of philosophies and what modern management should be, but it has been undeniably effective. – Guardian