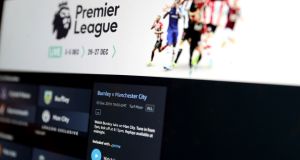 Tottenham have revealed that one of their players has tested positive for Covid-19 and will self-isolate for seven days, although he is not experiencing any symptoms of the virus. The London club want to keep his identity confidential. It is understood he is not a key first-team player.

The positive test was the only one from the Premier League’s fifth and latest round of screening, which took in 1,197 players and members of staff at the 20 clubs – representing another boost on the road to Project Restart.

The league has pledged to make public the results of the tests in the interests of transparency and the aggregated numbers now show that there have been 13 positives from 5,073 people screened.

The fear has always been that high or rising numbers of infections could jeopardise the plan for the league to restart on June 17th and complete the remaining games by July 25th and 26th but that has not been the case thus far, showing the safety measures introduced at training grounds are proving robust. The isolated positive announced follows zero positive results from the previous round of testing.

The league and the clubs will hold their latest conference call on Thursday at which a variety of topics will be discussed. They include curtailment scenarios and a proposed fixture list, together with more technical matters relating to player registration, squad size and substitutes.

The London Metropolitan Police say they will look at the final proposed fixture list before recommending whether any games in the city should be moved to neutral venues. In Liverpool, the city council’s safety advisory group is due to meet early next week, with Everton hoping it will allow them to stage the derby against Liverpool at Goodison Park over the long weekend of June 19th-22nd.

Amazon has announced its four remaining televised matches will be made available free to air, to go alongside Sky Sports’ pledge to do the same with 25 of its 64 games and the BBC’s four terrestrial fixtures. Premier Sports has broadcast games earlier in the season in the Republic of Ireland that were shown on Amazon in the UK. – Guardian