Planned internal restructuring to go ahead at Abbotstown 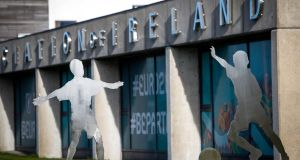 The FAI board confirmed that it has agreed to proceed with a planned internal restructuring of the association. Photograph: Ryan Byrne/Inpho

The FAI’s board said that the association is open to “constructive” talks with any of its stakeholders about the process of change that has been ongoing out in Abbotstown since the departure of John Delaney last year.

In what seems an obvious reference to the letter sent by Nixon Morton, a member of its 79-strong council to Uefa and Fifa, in which he raised concerns over proposed changes at board level that he contends would give effective control of the association to independent directors and those who appoint them, the organisation insists the current board, which met on Tuesday evening, “is available to engage in dialogue with any stakeholder with constructive input during this process, in the interest of developing and promoting the game in Ireland.”

In the Memorandum of Understanding agreed with Government in January, the change at board level from four to six independents is supposed to be provided for in the association’s rules by July but the process has been delayed by the current coronavirus crisis and no date has been so far for the required egm.

Various committee structures set out in last year’s governance review group report are also expected to be revisited with interim chief executive Gary Owens, and others, having suggested that the original recommendations were flawed, in part due to the hurried nature of the process.

Morton also raised concerns regarding the way the process of appointing a permanent chief executive has seemed to drag out but it is understood that newspaper advertisements inviting applications for the position are expected to be placed over the next few weeks with the process then set to take a couple of months.

In the meantime, the board says that it has agreed to proceed with a planned internal restructuring of the association with proposals for changes to the way that staff are deployed within the organisation set to be drawn up before the end of June.

Staff are said to have been consulted in recent months, however, regarding the way the various departments in Abbotstown function and there is an expectation that some will be redeployed within the association, a possibility first raised during Noel Mooney’s stint back at the association last year.

“The Board of the Football Association of Ireland unanimously agreed at a meeting on Tuesday night to proceed with its plans to develop a strategy incorporating a planned restructuring of the Association supported by the required constitutional reform for the benefit of everyone involved in football in Ireland,” read the statement issued on Wednesday afternoon.

“The Board is further committed to regaining the trust of the public and the key stakeholders who are supporting the Association to help them achieve that plan. The Board are further committed to implementing the highest standards of corporate governance and will ensure that all those involved in the game of football will be represented democratically in any future structure.

“The Board of the FAI is available to engage in dialogue with any stakeholder with constructive input during this process, in the interest of developing and promoting the game in Ireland. The Board will continue to work on charting a safe return to football and completing the process for the appointment of a CEO.”