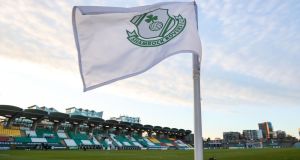 Premier Division clubs have been given until the end of this week to express interest in entering second teams in the League of Ireland’s First Division for next year. The invitation went to clubs on Monday after the National League Executive Committee endorsed the move.

The invitation has angered existing First Division sides who resisted the entry this time last year of a second Shamrock Rovers side which the club used as part of its youth development strategy. Other clubs argued that the team would not be competing on an equal basis and would distort the competition.

In the end, with the league needing to maintain even numbers, it was agreed that Rovers’ participation would be reviewed after a year and rivals had hoped that expressions of interest by the likes of Treaty United and St Francis in joining the league might allow the League to exclude them again now.

Instead, the involvement of second teams could be expanded with Dundalk and Bohemians among those could who be interested in taking up the offer.

Former Northern Ireland international Jim Magilton has been linked with a new Director of Football role at Dundalk. The 51-year-old, who previously had a spell on the coaching staff of Shamrock Rovers is reported to be one of three candidates on a shortlist for the job. He is currently the Elite Performance Director at the IFA.

Interim manager Filippo Giovagnoli, who is expected to sign a deal to take the role on a longer term basis, suggested recently that the new position would be created.