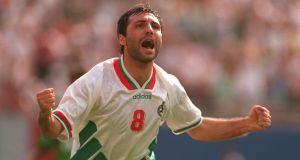 Hristo Stoitchkov: regarded as Bulgaria’s greatest ever player, the striker’s six goles won him the Golden Boot at the 1994 World Cup and he also became the only Bulgarian to be named European Footballer of the Year.

At first glance the Nations League clash between Ireland and Bulgaria seems like the footballing equivalent of two bald men fighting over a comb.

Two countries desperate to avoid being amongst the first international sides ever to suffer the embarrassment of relegation playing the final game of a competition that nobody understands in an empty stadium during a pandemic.

However, the footballing history of these two countries goes back to the very start with the first competitive game of the Irish Free State being against Bulgaria at the 1924 Olympic Games.

Somewhat optimistically the organisers allocated the game to the 45,000 capacity Stade de Colombes near Paris but only 1,659 bothered showing up including 1,137 complimentary ticketholders.

This would not be the last time that you literally could not give tickets away for an Ireland match.

In his book The Irish Soccer Split, historian Cormac Moore notes that the match referee claimed that he had never encountered a more nervous bunch of players than the Irish making their 1-0 victory all the more impressive.

But it is an even more nerve-wracking 1-0 defeat of Bulgaria 63 years later that remains one of the most famous victories in the history of Irish football despite the fact that Ireland didn’t actually play in the fixture.

In October 1987 the Republic of Ireland finished its qualifying campaign for Euro 88 with a 2-1 home victory over Bulgaria leaving the visitors requiring just a draw in their final group game at home against an already eliminated Scotland to qualify at our expense.

As Scotland had not won away for five years and Bulgaria had not lost at home for three years the outcome seemed like such a formality that Jack Charlton preferred to go fishing rather watch the match on television. But with just three minutes left in Sofia debutant Gary Mackay scored his only ever international goal to secure an unexpected 1-0 victory for Scotland that qualified Ireland for our first ever major championship as group winners.

Bulgaria’s greatest ever achievement was reaching the semi-finals of the 1994 World Cup. Their qualification was probably the most dramatic in European history and again went down to the last match this time away to France with the hosts only needing a draw to qualify. With the scores level at 1-1 and with only seconds remaining, substitute David Ginola took possession but instead of simply running down the clock he inexplicably overhit a cross intended for Eric Cantona.

Seizing upon this unexpected final possession Bulgaria immediately launched a lightening quick counterattack that saw Emil Kostadinov score a winning goal with just one second left on the match clock.

Explanations for this remarkable turnaround differed wildly. French manager Gérard Houllier, forgetting the golden rule of management about never publicly criticising a player, called Ginola an “assassin” who had “committed a crime against the team”.

An alternative explanation was put forward by the visiting state commentator who simply shouted “God is Bulgarian!”.

Bulgaria would make the most of their extraordinary reprieve. In their previous five appearances at the World Cup finals Bulgaria had never won a single match, but at USA 94 they made the last four. In the quarter-final they recovered from being 1-0 down to eliminate the reigning world champions Germany 2-1 in a match accurately described by manager Dimitar Penev as “the finest day in the history of Bulgarian football”.

The most successful of the nine Bulgarians to have played in the Premier League is Dimitar Berbatov, who starred for both Manchester United and Spurs. Berbatov claims to have learnt English by watching The Godfather movies, which might explain an apparent lack of humility. Having scored for Fulham against Southampton in 2012, the striker was booked for revealing a t-shirt generously offering tactical advice to his team-mates. It simply read “Keep calm and pass me the ball”.

Unfortunately Berbatov soon discovered that being called up by Bulgaria was an offer he could refuse leading to his premature retirement from international football aged just 29 but his 48 strikes make him his country’s highest ever goal scorer. Berbatov has been named his country’s Player of the Year on a record seven occasions and he was unfortunate to miss out on the award in 2011 when the winner was decided by a national vote.

Perhaps annoyed at Bulgaria finishing bottom of their Euro 2012 qualifying group the general public placed Berbatov second well behind the unexpected winner Prime Minister Boyko Borisov who despite being 52 years of age continued to occasionally turn out for third division side Vitosha Bistritsa.

Even more impressive was the career of Stiliyan Petrov who remains Bulgaria’s most capped player with 105 appearances. Petrov played for both Celtic and Aston Villa and claims to have learnt his English by working nights in a burger van in Glasgow.

Petrov recalled that this would lead many Celtic supporters to conclude that they must be much more intoxicated than they thought as they were clearly imagining that their team’s star player was serving them fast food.

Sadly Petrov was diagnosed with acute leukaemia in March 2012 and though he recovered his playing career was over. So popular was the Bulgarian in the number 19 jersey that for the rest of the season the fans at Villa Park would applaud Petrov throughout the 19th minute of every home match.

Bulgaria’s greatest ever player is Hristo Stoichkov whose six goals at the 1994 World Cup won him the Golden Boot and saw him become the only Bulgarian ever to be named European Footballer of the Year. Perhaps the only thing that matched Stoichkov’s extraordinary ability was his explosive temper which as a 19-year-old saw him receive a life ban for his part in a brawl during the 1985 Bulgarian Cup final.

Thankfully this punishment was later reduced, allowing Stoichkov to become a key member of Johan Cruyff’s “Dream Team” at Barcelona where he won five La Liga titles and the Champions League. Stoichkov was later named as manager of Bulgaria but, perhaps unsurprisingly, this ended badly with a number of star players, including Petrov, refusing to play for him.

The two traditional giants of the domestic game are CSKA Sofia and Levski Sofia who between them have 57 title wins. Remarkably, for the last nine years the Bulgarian championship has been won by Ludogorets who had previously never won the league. A large part of the explanation for this astonishing turnaround is the influx of a number of Brazilians such as Cicinho and Wanderson who when naturalised qualify to play for Bulgaria.

Sourcing players from the strongest footballing country on the planet makes perfect sense from a sporting point of view. But for keen football statisticians it undermines a remarkable tradition of Bulgaria only selecting players whose surname ends with the letter ‘v’. For example, in their seven appearances at the World Cup Finals Bulgaria have fielded 120 players with 34 more unused substitutes but only two have surnames not ending with a ‘v’ (Milko Gaidarski in Mexico 70 and Petar Mikhtarski at USA 94).

Sadly Stephen Kenny does not have any Brazilian-born players available to help Ireland end a sequence of six matches without a goal.

Indeed Kenny has only seen his team score once when a last-minute Shane Duffy header salvaged a 1-1 draw in our last meeting with Bulgaria in September. This makes Ireland slight favourites to suffer the indignity of being relegated to the third tier of the Nations League, a competition with a structure so strange that being demoted might actually make it easier for us to qualify for the 2024 World Cup.

James McDermott is a UCD law lecturer and a fervent soccer supporter.