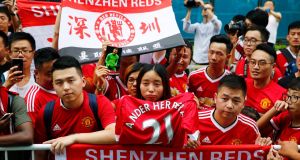 Manchester United fans at the team hotel in Beijing after the match against Manchester City was called off. Photograph: Thomas Peter/Livepic/Reuters

Chase the dollar or chase bespoke, ideal preparation for the new season?

This is the question fans of Manchester United and Manchester City may ask following the fiasco of yesterday’s derby in Beijing being called off less than six hours before kick-off, and the less-than-perfect conditions often found at far-off destinations.

Given the pitch at the National Stadium was a patchwork of loose turf and was infected with fungus, the puzzle is why the match was not cancelled earlier.

The result is damaging for United, City and Relevant Sports, the International Champions Cup organiser, which is headed by Charlie Stillitano, the man whose brainchild the tournament is.

Hu Mulin, a 17-year-old wearing a David Beckham shirt outside the Bird’s Nest, as the ground is also known, said: “I am a big Manchester United fan. I love Beckham, Rooney and Rashford. Today, I am angry because I had a ticket and now they can’t play the match. We drove here by car and it took six or seven hours with my father and my friend.”

The debacle may also cause awkward debate involving José Mourinho, Pep Guardiola and the commercial departments of United and City about where the clubs go next summer.

The decision to cancel was taken at 2pm local time following an inspection of the pitch but Mourinho and Guardiola already held strong reservations. These were simple: three weeks before the Premier League season starts, they had to prepare players for what promises to be a seismic campaign in stifling heat and play on a pitch that threatened serious injury.

On Sunday, Guardiola, despite having considerable input into City’s tour, pointed to the conditions, saying: “We know the humidity for training is not ideal.”

Dire weather that “would have caused problems anywhere in the world”, according to Ed Woodward, United’s executive vice-chairman, was blamed for the postponement.

The stifling, humid conditions that affect south-east Asia make it difficult for players to train and were a factor also present on Friday when United lost 4-1 to Borussia Dortmund in Shanghai.

But the glaring truth is that United and City are engaged in the race for global reach and the finance this yields.

1 The Offload: Ireland are stuck in no man’s land
2 Nicky English: Galway and Waterford face battles with fatigue in All-Ireland semis
3 Every kind of wind imaginable was against Tipperary football - and they came through
4 Ken Early: Roles have reversed for Guardiola and Mourinho
5 Tipperary and Cavan deliver two earthquakes in one day
Real news has value SUBSCRIBE
Crossword Get access to over 6,000 interactive crosswords