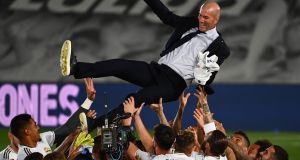 Just before 11pm on Thursday night, two months after the title race was supposed to finish and a few seconds after it actually had, two men working for the local council climbed up the statue of the goddess Cibeles, tied a Real Madrid scarf around her neck, draped a flag over her shoulders and climbed back down. Wearing hi-vis shirts, wellies and waders, they were the only ones who got close. Cars passed by beeping but on the street there were more police than people. Usually the scene of celebration, thousands gathering, this time fans had been asked to stay away and the men who had won the league weren’t coming either.

They were 15km north-east. “We would have liked be there at Cibeles with the fans, but there will be time for that and they’ll be happy watching at home,” Zinedine Zidane said. Around him, the floor was soon covered in confetti and his players wore commemorative T-shirts. We Are The Champions boomed around and a celebratory banquet was prepared, burger and chips the dinner of champions. But this was their training ground, not the Santiago Bernabéu, and when Sergio Ramos lifted the trophy only a couple of hundred people were there to see it: staff, ballboys, six reporters and Villarreal standing politely to applaud. It was, the manager said: “Strange for everyone.” It had been that kind of season.

Yet if there had been no wild celebration, no open-topped bus on the day that Spain paid tribute to almost 30,000 victims of coronavirus and figures brought fears of a more outbreaks and renewed restrictions, there was nothing empty in the embraces. Madrid’s manager felt fulfilled, more than ever before. “I don’t have the words; I feel huge emotion,” he said. He also described it as one of the most significant days of his life. For the man who has won a trophy every 19 games, the day he won La Liga stood above all those European Cups, not last because of how far they had come. The longest season had ended with Madrid’s third league in 12 years, just as he had hoped it would.

“Our season will be good, I’m convinced,” Zidane had said almost exactly a year ago. Which might sound standard enough, the usual pre-season optimism soon bitten by reality, but that was in New York where his side had just let in seven against Atlético Madrid. “One great team and one set of ruins,” judged one front cover; there was “no football, no fight, no plan.” Only there was, and from the rubble came the champions, the hint of a new culture emerging at a club where Europe had eclipsed all else. “Zidane built the plan; the league was our objective from the start,” said Thibaut Courtois on Thursday night.

It wasn’t smooth and it wasn’t always sparkling, but slowly something was building even if it wasn’t with the tools Zidane had in mind. Paul Pogba hadn’t arrived, while James Rodríguez and Gareth Bale hadn’t gone, their moves blocked after the defeat to Atlético. They were destined to play minor roles – unlike the men in whom Zidane trusted when others didn’t, club included. This is not a new side, at least not when it comes to the names. Eight players have started more than 20 league games and all of them were there already. Sergio Ramos and Luka Modric are 34, Marcelo and Karim Benzema 32, Kroos 30.

Between them, they have 54 seasons at the club; some didn’t want them to have any more. If earlier in the season it so often felt like Madrid relied on the dynamic presence of Fede Valverde, and while Vinicius was decisive in the clásico, ultimately this feels like the success of the old guard, trusted and revived by Zidane.

Built around a spine of seven+two that have almost always played – Courtois, Carvajal, Ramos, Raphaël Varane, Mendy/Marcelo, Casemiro, Kroos, Modric/Valverde and Benzema – Madrid have won a league in which they’ve had minimal contributions from their new arrivals (Mendy apart) and even less from their four most expensive players, including their two most costly signings ever and four of the all-time top six. Bale, Hazard, Jovic and Rodríguez cost €336m for an average of 8.75 games and 1.5 goals. With Hazard struggling with injuries, Benzema has led, scoring 21 league goals; that’s more than all the other forwards put together. The second top scorer is Ramos, on 10.

And yet at every step, there have been key contributions at key moments. Twenty-one different men have scored: of the outfield players, only Éder Militão and Brahim Díaz (39 minutes) have not. They went top at Valladolid in January, Nacho Fernández heading in the only goal and Zidane talking about the significance of set plays. The week before Casemiro scored both against Sevilla. At Getafe, Varane scored two from set plays. At Alavés, Dani Carvajal and Ramos scored. All that in a seven-week run than included 0-0 draws at Athletic and Barcelona and a 95th-minute equaliser at Valencia, scored when Courtois went up for a corner.

There were glimpses of something more expansive – Eibar, Leganés – but that idea was taking shape. There was variety in their formations – 4-3-3, 4-5-1 4-4-2 – they pressed higher than before and the ball was brought out cleaner now, while there was also a tighter structure than in Zidane’s first spell. Solidity and seriousness were the foundation stone, an idea more pronounced after the pandemic but there from the start. When Madrid dropped points in week two, giving the ball away, Zidane complained that they should have just booted the bloody thing.

In week five he did something even he hadn’t done before: took a Madrid team to the Sanchez Pizjuán and won 1-0, the word solidarity a recurring theme afterwards. Two weeks after, they drew the derby 0-0, Courtois responding to suggestions of conservatism by saying: “We weren’t going to go mad.” “Solidity is very important; it’s what gives you life,” Zidane added. “If we’re defensively strong, OK. We’ll do something in attack.”

Not that it was perfect. Beaten by Mallorca in the autumn, there were doubts. And had they lost in Istanbul in October, Zidane might not have survived. They came through those and went top when they defeated Barcelona in March, but that was their only win in four league games. Out of the Copa del Rey, they lost to Manchester City in Europe too. The week after the clásico, they lost at Betis and Barcelona were leaders again, the situation delicate. And then everything stopped.

When it restarted, it was something else. Not so much two halves as two different things clumsily welded together, like From Dusk Til Dawn. Barcelona had never really convinced even when they led, the team desperately trying to keep the club’s crisis at bay, and now they started to collapse, dropping eight of the last 30 points on course to finish with their fewest points in over a decade. Meanwhile, Madrid got stronger, the new context suiting them.

If Zidane had changed Madrid’s culture, it is also true that something shifted when the league became more like the Champions League, the target within touching distance, a sole focus. Five weeks to get through and nothing else, 11 games to glory. Or 10, as it turned out.

“Lockdown was good for us, to react and take the return super seriously: there was no margin for error in our minds,” Ramos admitted. “What makes now different is that after lockdown when they came back they wanted to do great things; you could see it in the training sessions; they wanted to do more, and that tells you everything,” Zidane revealed. Everything else stripped away – the noise, the tension, the intangibles, all those elements that bring equality – they were too strong. “When their fifth sub is Kroos …” Athletic manager Gaizka Garitano said.

The former Madrid manager Bernd Schuster even suggested that it might even have been good for them to play behind closed doors, away from the pressure of the Bernabéu, where those tight games are a problem, not a pathway. One that led inevitably to the title, with 10 wins from 10, just four goals let in.

Since the restart Madrid have never been behind, let alone beaten. They started two points behind and finished seven points in front; it wasn’t always brilliant – although the second half against Valencia and the first in Granada were superb – but it brokered little argument. They didn’t even need all their games. Zidane insisted that the title race would run until the last day but for once he was wrong. Victory against Villarreal meant that Madrid won the league with a game to spare.

After everything that happened, everything he believes in, all the doubts that he knows are there – even from within own club, even from within his own mind – this was the competition Zidane wanted most of all. No one had appreciated Barcelona’s titles like him, which is why no one appreciated this quite like him. The league was the true test, he kept insisting, the proof that you’re the best, reason enough to visit Cibeles, even if that has to be some other day.