Celtic have not won in 12 trips to Italy, and hope to put that right at the Stadio Olimpico 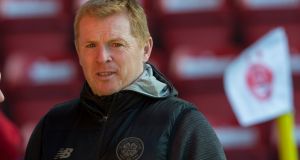 Celtic manager Neil Lennon: “We know we probably won’t dominate possession the way we would do normally in home games, and we are going to have to show a huge amount of concentration and quality.” Photograph: Ian Rutherford/PA Wire

Neil Lennon wants Celtic to end an unwanted record when they take on Lazio in Rome on Thursday night.

The Hoops have not won in 12 trips to Italy, with three draws and nine defeats, ahead of their Europa League clash at the Stadio Olimpico.

The Scottish champions beat Lazio 2-1 at Parkhead last month, and are top of Group E with seven points from three fixtures. Now the Hoops boss is keen to win on Italian soil.

The Northern Irishman said: “Realistically it is going to be very difficult to win here. Records are there to be broken. We are going to have to play very well and take our chances if and when they should arise.

“We know we probably won’t dominate possession the way we would do normally in home games, and we are going to have to show a huge amount of concentration and quality.

“In the context of the group it is such an important game. And there is so much quality on show. It is my first time in Rome taking a team, so it is a game we are very excited about and very motivated for.”

Asked if the win against Lazio had given him confidence for the return match, the former Celtic midfielder said: “It was a classic game. Both teams played really well. We were winners on the night, but we know how difficult the game is going to be.

“Lazio’s form of late has been really good. They had another great victory in the San Siro [against AC Milan] on Sunday, so we are under no illusions how big the job is, to come here and try to get a result.

“But the players are also on great form, they have played very well domestically and obviously currently top the [Europa League] group. We know that can change very quickly, but we are here to try to get a positive result, and there is good belief amongst us to do that.

“In terms of the safety of the fans, we just want them to come and have a celebration, enjoy themselves. The atmosphere at Celtic Park when Celtic played Lazio was fantastic, the game was fantastic so we expect more of the same.”

He said: “He has been absolutely sensational over the last three or four seasons in terms of consistency, level of performance, game intelligence and his robustness.

“I think last season he played 69 games and you can count on one hand the poor performances. In my second spell here he has been absolutely wonderful.

“We knew there would be suitors for him, so I am absolutely delighted for the board backing me on this one, giving Callum the contract we think he deserves.

“Now the player can really settle and keep writing his own history at the club because he has done some great things already.”