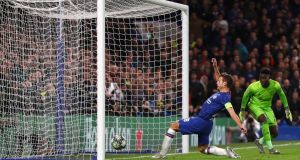 Good luck trying to make sense of it. With 55 minutes gone Ajax led 4-1 and were playing with the regal air that saw them destroy Real Madrid and Juventus last season. A hush had fallen over Stamford Bridge. Hakim Ziyech and Donny van de Beek had played magnificently and Chelsea, horribly outclassed in every area of the pitch, were staring humiliation in the face.

Nobody could have predicted what happened next. Not even Frank Lampard. He could not have imagined that his developing side would summon the belief and resilience to turn it round; that Ajax would have their two centre backs, Daley Blind and Joel Veltman, sent off in the same move; that Reece James, a 19-year-old right back, would be the player to make it 4-4; or that César Azpilicueta would have a potential winner ruled out by VAR.

What an absurd night. Ajax, brilliant in patches, pressed the self-destruct button and Chelsea, a shambles for long stretches, are somehow joint-top of Group H with two games left. Lampard’s side are level on points with Ajax and Valencia. They will need to be better when they travel to Spain later this month.

The defensive organisation that brought Chelsea victory in Amsterdam two weeks ago was conspicuous only by its absence, which was asking for trouble against opponents who reached the last four of this competition last season. It was no surprise that Ajax were as bold as ever and it soon became apparent that they were intent on playing to their natural instincts, even though Uefa had forbidden their fans from filling the away following scenes of disorder when the Dutch side visited Valencia last month.

If Ajax were bothered by not having any supporters present, they certainly hid it well during the first half. Their approach was open, with every player in the famous red and white shirt showing a tender appreciation of the ball, and went ahead with the softest of goals inside two minutes. Quincy Promes whipped in a dangerous free-kick from the left and Tammy Abraham made a hash of his attempted clearance at the near post, swinging wildly at the ball and diverting it beyond Kepa Arrizabalaga with a light touch.

Chelsea’s response to Ajax’s opener was impressive. It was a breathless start and Lampard was out of his seat in the dugout when Christian Pulisic, surging into the area after good work from Mason Mount, was chopped down by Veltman. Gianluca Rocchi, the Italian referee, instantly pointed to the spot and Jorginho casually sent André Onana the wrong way.

Panic over? It briefly seemed that way, especially when Mateo Kovacic split the Ajax defence with a wonderful pass to Abraham in the 14th minute. The striker finished emphatically, but his celebrations were cut short by an offside flag.

Ajax stayed calm and regained the lead with a classy goal. Erik Ten Hag had picked an attacking side, dropping Edson Álvarez from midfield, and his decision to use David Neres on the right caused problems for Marcos Alonso. Chelsea’s left back was vulnerable before being replaced by James and Ajax’s second goal came from his flank when Hakim Ziyech curled in a bouncing cross for Promes to peel away from Azpilicueta and score with a powerful header.

Chelsea began to look naive. There was no flow to their passing, no hint of another equaliser. Their forwards were not in the game and the way Van de Beek and Ziyech pulled Jorginho, Mateo Kovacic and Mount apart in midfield must have made Lampard wonder if he should have started N’Golo Kanté, who was back in the squad after recovering from a groin injury.

Ajax were in control, though only Ziyech will know if he was going for goal when he flung a free-kick towards the far post from a position deep on the right. Ziyech’s delivery flew over Arrizabalaga and it summed up the opening period for the hosts when the ball bounced off the inside of the post before going in off the Chelsea goalkeeper for another own-goal.

Fortunate when Promes missed a chance to put Ajax out of sight, Lampard put James at right back and moved Azpilicueta to the left during the break. Chelsea’s manager must have torn into his players and they made a furious start to the second half, with Kurt Zouma setting the tone when he charged out of defence, beat four men, fooled Blind with a nifty stepover and fired over from 18 yards.

It was too manic, though, and Chelsea were unable to keep Ajax under siege for long. Abraham had a shot palmed aside by Onana but the greater poise belonged to the visitors. They pushed hard, looking for errors, and Pulisic was punished when he lost possession in the 55th minute. Ziyech fed Van de Beek, who had time and space to pick his spot.

Then things got weird. Chelsea refused to let their heads drop, even when Mount limped off, and they dragged themselves back into the contest in the 63rd minute, Azpilicueta bundling the ball over the line after Abraham had flicked on Pulisic’s cross.

Anarchy reigned. Ajax completely lost the plot. In the same move Blind, already on a booking, bodychecked Jorginho before fouling Abraham. Play continued and Callum Hudson-Odoi, on for Mount, saw his shot handled by Veltman. Rocchi pointed to the spot before handing second yellow cards to both Veltman and Blind, leaving Ajax to protect their lead without both of their centre backs. Jorginho converted his second penalty of the night and the nine men could not hold out.

The equaliser arrived when Abraham’s header bounced hit the bar and fell to James, who fizzed a low drive home to send Stamford Bridge wild. There would be another twist when Azpilicueta fired Chelsea into the lead, only for a VAR check to disallow the goal for offside. – Guardian