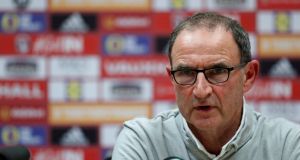 Martin O’Neill: has managed to coax a big performance from his side on previous occasions when the chips were down. Photograph: John Sibley/Reuters

Ireland have been through a few do-or-die games in Martin O’Neill’s time in charge – the qualifier against Germany in the Euro 2016 campaign, the play-off against Bosnia, the do-or-die group match against Italy at the Euros, the second-round match against France.

As far as Martin O’Neill was concerned the point of comparison with tonight’s match in Cardiff was obvious.

“It’s most similar to the one we had against Italy in Lille,” O’Neill said at the Cardiff City stadium last night. “I thought that night we played with a lot of verve, a lot of determination. A lot of that will be necessary tomorrow night. We created a lot of chances, and finally took one.”

The Italy match was an interesting one for O’Neill to pick out, as that was probably the meanest and most ruthless Ireland have been since he took charge.

The attitude was reflected in the selection – out went John O’Shea, Glenn Whelan and Wes Hoolahan, in came Shane Duffy, James McClean and Daryl Murphy.

At the moment of truth O’Neill went with his most physically powerful line-up, and it looks like we can expect more of the same against Wales.

Murphy should start again after his two goals on Friday, with O’Neill unconcerned that two games in such quick succession will be a problem for the 34 -year-old. The manager also pretty much confirmed that McClean would come straight back into the team, noting that his team would be “refreshed” by the returns of the West Brom winger and Robbie Brady. That means Wes Hoolahan is likely to start on the bench, as he did in Lille.

This at least would mean that Hoolahan would be available for the end of the game. While it is always disappointing to see Ireland line up without their best player, particularly in what could be his last international, keeping him in reserve could help to address one of the big problems Ireland have had in 2017; staying composed when chasing a goal in the closing stages.

At home against both Wales and Serbia, Ireland played the last 25 minutes against opponents who had been reduced to ten men, and scored no goals.

Hoolahan wasn’t on the pitch for any of those minutes: he was injured for Wales and had been substituted against Serbia. In Lille, against Italy, he came off the bench and set up the winner for Brady.

If O’Neill is planning to put Wales under as much physical pressure as possible, it doesn’t sound like it will come as much of a surprise to Wales manager Chris Coleman.

“I’ll be surprised if it’s like a game between some of the top boys in the Premier League where there’s loads of possession, I don’t think it’s gonna be one of those,” said Coleman, with some understatement.

Coleman’s talking points were clear. Wales’ history of not qualifying for the World Cup since 1958 was irrelevant, they had nothing to be afraid of, it was a pleasure for them to be part of such an occasion, they had a game plan that they believed in, and he had every confidence they would carry it through.

The Welsh boss’s mood was hugely positive: “once you start thinking about the negatives you’re guaranteed to get a negative, simple as that.”

He talked unabashedly about his players being a “golden generation” for Welsh football and mentioned the words “game plan” more than a dozen times: Wales’ success is built on a foundation of every player understanding where they fit within the system.

This was evident when you compared the press conferences done by Coleman and his defender, Chris Gunter, who appeared separately from his manager yet came across as a Coleman clone, reiterating the exact same talking points: no fear, enjoy the occasion, execute the game plan.

O’Neill, by contrast, appeared with Darren Randolph, who said nothing that suggested he was intimately familiar with his manager’s philosophy and ethos; in fact he said nothing of any interest at all (sample quote: “It’s another football game, I’ve played hundreds of them.”)

Gunter, who plays his club football for Reading, currently 20th in the Championship, is a good example of the mysterious chemistry of the Welsh side. He was recently named Wales’ Player of the Year ahead of Gareth Bale and Aaron Ramsey. Yet over the last few weeks he has been hammered by Reading supporters after costing them goals with bad mistakes against Sunderland and Fulham.

How to account for Gunter looking like a better player at a higher level of football? It might be because he knows his role in the Welsh side, whereas Reading have used him in different positions.

And then there is the fact that like most of the other Welsh players, he looks forward to joining up with the national squad. Wales are in that happy place where a lot of their players are, for whatever reason, reserving their best performances for international level.

Goalkeeper Wayne Hennessey and central defender Ashley Williams are among the players to have risen above poor recent club form to excel for their country.

Wales are the team in better form, they have home advantage, and as Coleman kept reminding us, they have a selection of game plans that they know inside-out. Yet they are without their best player, and on most of the previous occasions when O’Neill has needed a really big performance from his team, they have delivered. What happens tonight is anyone’s call.