Eriksen finally gets Spurs in the Wembley winning way 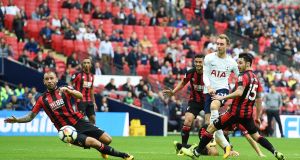 Tottenham are finally off the mark at Wembley after Christian Eriksen sealed a narrow win over Bournemouth and his side’s first Premier League victory under the arch.

This was still not the imperious Spurs of White Hart Lane last season but Eriksen at least gave their stop-start display a positive finish, his second-half strike securing a morale-boosting 1-0 victory.

Harry Kane has rightly taken the plaudits in recent weeks for his relentless scoring form but on a rare off-day – his first game in six without a goal – it was Eriksen’s turn to assume the limelight.

Eriksen has been by far Tottenham’s best supporting act during Kane’s golden streak and after scoring twice in two games for Denmark over the international break, another here means he now has four in five for club and country.

Bournemouth certainly had chances of their own but Eddie Howe must add some edge to their creativity if they are to avoid a relegation battle this term. The Cherries have managed only four goals in eight league games so far.

Andy Carroll left West Ham high and dry as his reckless dismissal left them scrambling for a 1-1 draw against Burnley.

Carroll was touted for an England recall by team-mate Aaron Cresswell last week, but that particular bandwagon hit the skids as soon as the striker picked up two cautions in as many first-half minutes, elbowing James Tarkowski in the air then barrelling into Ben Mee moments later.

That left the Hammers with more than an hour to protect Michail Antonio’s freak goal – slotted into an open net after Mee and goalkeeper Nick Pope both failed to connect with the ball – and New Zealand striker Chris Wood pounced late to deny the visitors their first back-to-back wins of the season.

The New Zealand striker’s fourth of the season places him as a considerably more productive target man than Carroll, while West Ham fans must dream about him being as reliable a member of their dressing room as the tireless Antonio.

Tammy Abraham delivered his first Premier League double as Swansea finally got off the mark at home with a 2-0 victory over Huddersfield.

The on-loan Chelsea youngster turned 20 earlier this month and his third and fourth goals of the league campaign were a belated birthday present as Swansea climbed out of the relegation zone.

Abraham’s goals came either side of the break as the England Under-21 striker inflicted fresh agony on Huddersfield, opponents he punished last season during a loan spell at Bristol City.

Swansea had suffered three opening home defeats for the first time in their history, so the three points will come as a huge relief to boss Paul Clement and his players.

It was also another grim reality check for David Wagner’s Huddersfield after their impressive start to life at the top.

The Terriers have gone six games without a win and are now only one point above Swansea.