Aberdeen remain second on goal difference after win away at Hibernian 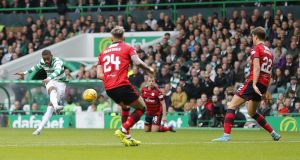 Scottish Premiership round-up: Celtic retained top spot as an Olivier Ntcham strike was enough to earn them a 1-0 win at Dundee.

The French midfielder found the net with a powerful low shot from 25 yards after 61 minutes, but Scott Bain in the home goal should have done better.

Ntcham’s effort was well-struck and moved in the air, but close enough to the centre of the goal that Bain should have got his body behind it.

Victory kept the visitors ahead of second-placed Aberdeen on goal difference after the Dons also won 1-0 away from home. The Dons made it three straight wins with success at Hibernian, Gary Mackay-Steven providing the finish to a flowing move in the 38th minute to seal the points.

Kilmarnock recorded their first league victory of the season to move off the foot of the table, winning 2-0 at Partick Thistle, who replaced them at the foot of the standings.

Kilmarnock appointed Steve Clarke as their new manager earlier on Saturday, but it was interim boss Paul McDonald who masterminded this triumph, with Kris Boyd in the 39th minute and Adam Frizzell in the 63rd getting the goals.

Motherwell added to Hamilton’s problems as they hit back to win 2-1.

Hamilton, who on Friday admitted they had fallen victim to a major fraud, went ahead through Giannis Skondras after 15 minutes, but Andy Rose equalised just after the half-hour mark and Peter Hartley grabbed the winner six minutes after the break.

Ten-man Hearts won at Ross County, despite losing Connor Randall to a second booking in the 65th minute.

By that point there were already 2-1 up, Jamie Walker restoring their lead in the 59th minute after Davis Kellior-Dunn had equalised two minutes after Esmael Goncalves’ 34th-minute opener.

And the visitors held on to end Owen Coyle’s winning start as County boss.

James Lowe enjoying Leinster’s unbeaten run, the secret to TJ Reid’s longevity
Here is your handy guide to sport on television this week