Liverpool have to be more cautious without defender, leading to a system breakdown 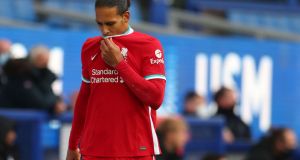 Over the years, successive generations of Liverpool and Manchester United players have played out an almost unbroken series of appalling matches between England’s most successful clubs. Naturally the question arises as to why this particular big-club rivalry is so uniquely awful in the world of football. It’s not unknown for there to be good matches between Real Madrid and Barcelona, between the Milan sides, Boca and River . . . Why should Liverpool v Manchester United be so reliably terrible?

At some point, desperate for anything to take your mind off the game, the thought occurred that it might have something to do with the toxic atmosphere that surrounds it. Might the bad feeling spilling off the terraces be so malignant, the psychological pressure so intense, that the players become inhibited and lose the ability to play?

15 Irish Times view on the restless state of unionism

21 Joey Carbery on the Munster bench again for Connacht clash

24 Davy board to search for other potential cases of wrongdoing

26 I, Tonya reveals a deeper truth than Harding’s level of guilt

29 Long Covid in children: New data is cause for concern, scientists say

39 TG4 documentary to lift lid on ‘much maligned’ Peig Sayers