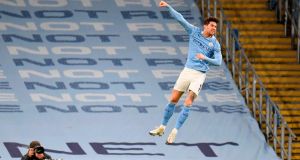 Like a champion racehorse Manchester City are timing their title challenge perfectly, this win moving them into second with 35 points, two behind Manchester United with a game in hand.

This cruise of a victory over Crystal Palace was their fifth in-a-row in the league and City can take over as leaders if they beat Aston Villa here on Wednesday though with United playing Fulham later in the evening it may be temporary.

Pep Guardiola’s surprise selection was the dropping of Phil Foden, who has an argument for being the current most in-form player and is City’s top scorer with 10. Roy Hodgson was unable to choose his best player as Wilfried Zaha was injured, with the manager selecting only seven replacements due to stretched resources.

A first alarm for Palace came from a Fernandinho ball driven into their area. This was repelled but the presence of the Brazilian was a clue to Guardiola’s thinking: at 35 he is used when he is most required and so his penchant for the physical stuff would meet Palace’s attritional approach head on.

Kevin De Bruyne is, of course, a more silky operator. Yet two corners he delivered from first the right, then left quadrant were each too strong for John Stones, the intended target.

Hodgson had his XI arranged in a 4-3-2-1 that featured Jordan Ayew at the tip, with Andros Townsend and Eberechi Eze pushed up behind. A Townsend cross aimed at the latter illustrated the thinking here yet the issue for Palace was the blue wave that moved from back-to-front effortlessly, as when Oleksandr Zinchenko hit Bernardo Silva before Kyle Walker took over though his cross was Sunday League standard, being sprayed wide.

Guardiola will have lamented the sluggish pace his side settled into. It improved when De Bruyne broke, passed infield, received again and shot at Vicente Guaita’s goal. Raheem Sterling took aim, then De Bruyne once more – each effort was blocked but City appeared to have awakened.

Palace were in fire-fighting mode yet could still break along the right via Townsend, who outpaced Stones and chipped over Ederson to the far post though no team-mate was there.

This was a brief cessation of pressure on the visitors as City took the lead. It was a strike of some beauty as De Bruyne killed Sterling’s ball before delivering an outside-of-the-right-boot cross that saw Stones rising and heading home for the defender’s debut league finish for City, as well as the Belgian’s 100th assist in all competitions for the club.

Yet the home team slowed once more – hogging the ball but content to stroll around in-between passes. Guardiola was seen throwing his hands in despair when play went sideways once too often and was happier when, suddenly, Silva found Ilkay Gündogan whose flick was headed by a diving Gabriel Jesus. Guaitaclutched it but Palace were again alarmed.

Guardiola’s half-time instruction was surely to inject greater urgency. Sterling showed how when accelerating past Tyrick Mitchell in the area before stumbling – the referee, Lee Mason, correctly ruling no penalty. Next Zinchenko, Rúben Dias, and Silva tapped the ball between them, play went right, and Sterling won a corner. De Bruyne, not for the first time, lifted the ball over a crowd of players and Palace escaped.

They did again when moments later Sterling pinged a cross into the back post and Silva could not connect. City were in control and soon the lead was doubled. Zinchenko won a corner, Silva took it, and the ball came to Townsend on the edge of the area and Gündogan pickpocketed the No 10 before curling a 20-yard peach into the top corner, to Guaita’s left.

Moments later Guardiola introduced Foden, hardly a sight to hearten Palace, and the youngster was soon galloping along the left. De Bruyne was next to trouble Guaita: his pot-shot from distance beat the goalkeeper but not his right post. Stones, though, did marking his 171st Premier League outing with a second, smashing past Guaita after the latter had kept out Dias’s attempt from a corner.

From here it was akin to a training ground exercise, City toying with an opponent a class or two below, Sterling’s fired in a late free-kick to Guaita’s left, completing an impressive evening. – Guardian