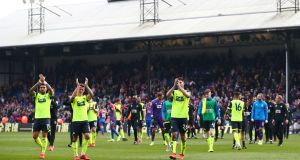 Huddersfield Town players applaud their fans after their defeat to Crystal Palace means they are relegated from the Premier League. Photograph: Reuters

Huddersfield Town became the second team of the Premier League era to be relegated before the end of March after a 2-0 defeat by Crystal Palace away meant they slipped 19 points from safety with six games remaining.

Wins for 17th-placed Burnley and Southampton in 16th sealed Huddersfield’s fate, as they matched Derby County’s record, set in 2008, for the earliest relegation from the Premier League after 32 games.

Huddersfield were doing a fine job of frustrating Palace in the Selhurst Park sunshine, with the hosts rarely threatening until the latter stages.

Huddersfield’s resistance was broken after Wilfried Zaha was fouled in the penalty area in the 76th minute, with Luka Milivojevic converting from the spot to put Palace in front.

Patrick van Aanholt’s late goal sealed the win, as Huddersfield slumped to their 24th defeat of the season.

As the players left the pitch, news filtered through that Burnley’s 2-0 win over Wolverhampton Wanderers and Southampton’s 1-0 victory at Brighton & Hove Albion had confirmed Huddersfield’s relegation.

Burnley boosted their own survival hopes with their win over Wolves at Turf Moor. Conor Coady’s second-minute own goal gave the Clarets a dream start and although the visitors dominated for much of the second period, 19-year-old Dwight McNeil fired home the second goal in the 77th minute.

Southampton held on for victory over Brighton at the AMEX Stadium which also boosted the Saints’ survival prospects. Pierre-Emile Hojbjerg scored what turned out to be the only goal in the 53rd minute but Brighton pressed for an equaliser, with Anthony Knockaert among those who missed good chances.

The Foxes had taken the lead in the 11th minute through Wes Morgan and Vardy’s late intervention confirmed a third straight win under new boss Brendan Rodgers.

In the day’s late game, West Ham United, after six unbeaten matches at the London Stadium, came unstuck with a lacklustre 2-0 home defeat to Everton. Goals from Kurt Zouma and Bernard moved Everton above the Hammers into ninth, one point behind Wolves and Leicester.

‘I want that gold medal’: Rhys McClenaghan talks Tokyo Olympic aspirations 07:00
Five Golf Classics for you to tee up at in 2020 06:00
Out of the shadows: Floodlights a priority for clubs across Ireland 06:00
AFL’s equalisation policies a possible guide for the GAA 06:00
Murphy confident Donegal remain on the right track 06:00