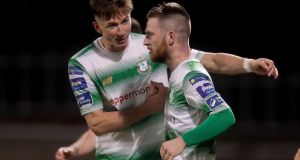 Jack Byrne grabbed two goals at Tallaght Stadium to help Shamrock Rovers towards a hard-earned victory over UCD as they retained their seven-point advantage at the top of the SSE Airtricity League Premier Division.

Fresh from his recent call-up to the Republic of Ireland squad, the former Manchester City man broke the deadlock on 19 minutes.

Despite their dominance in possession, Rovers surrendered their lead when Yousef Mahdy fired past Alan Mannus in the 37th minute.

UCD looked set to claim a share of the spoils, until Byrne turned home a Finn cross in the closing stages.

Indeed, after Kearns had raced forward for a last-gasp corner, Aaron McEneff slotted into an empty net to seal the Rovers win.

Keith Buckley’s first-half strike got Bohemians back to winning ways as St Patrick’s finished with 10 men at Dalymount Park.

The home side soon settled to dominate the first half and Simon Madden had to head off St Pat’s goal line from Dinny Corcoran’s shot on 22 minutes.

Keith Ward then dipped a delightful free kick up and over the wall that hit the outside of a post just past the half hour.

And though Brendan Clarke made a fine parry save, the ball broke for Buckley who arced his shot to the net from the edge of the area.

St Pat’s were better from the resumption with Lee Desmond hooking over the top early on.

But the game was up for the Inchicore side on 77 minutes when striker Mikey Drennan was shown a straight red card, apparently for dissent.

Having Mark Doyle sent off inside the opening half hour didn’t help the task of struggling Finn Harps. After fouling Zack Elbouzedi, he walked after another mistimed challenge on Duggan.

Waterford took just 10 minutes for the advantage to tell when Rory Feely’s pinpoint cross from the right found Drinan who headed into the bottom corner from eight yards.

The one-way traffic continued in the second half and they added to their lead on 65 minutes. Ciarán Gallagher could only parry Duggan’s low drive from the edge of the box and Drinan followed in for his brace.

Scott Twine scampered into the box on 73 minutes and squared for Duggan to find the top corner with a rising shot.

To wrap up the scoring, Izzy Akinade set up his fellow substitute Dean Walsh to head in the fourth in the final minute.

Following a scoreless first half which saw both defences in control, it was the performance of Derry playmaker Barry McNamee which turned this game on its head.

The Ramelton man displayed his influence in the 59th minute when playing the perfect through ball into the path of David Parkhouse and the striker drove the ball home from 16 yards.

That strike lifted the home attendance of 3,000 and Liam Buckley’s men were in trouble.

To be fair Sligo had their chances with Derry goalkeeper Nathan Gartside pulling off a spectacular save in the first half to deny Sligo’s lone hitman Ronan Coughlan after Eoghan Stokes had crashed a shot into the Sligo side netting when he should have done better.

Sligo finished the game on the front foot but the home side had the final say when Ciaron Harkin broke Sligo hearts during injury time when doubling Derry’s lead .

The lively midfielder was set up by substitute Gianna Seraf and Harkin arrowed his shot low into the far corner giving Mitchell Beeney no chance.