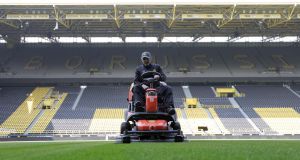 The grass is cut at Signal Iduna Park in Dortmund ahead of a potential Bundesliga restart. Photo: Friedemann Vogel/EPA

Last week, the Sports Medicine Task Force assembled by the German FA and German Football League published a document that sketched out potential logistic arrangements for behind-closed-doors football matches – known in Germany as “ghost games” – in case of a possible resumption of the Bundesliga next month.

One charming section shows a diagram of a stadium with the people represented as little coloured dots, showing how and where they might fit into the ground while maintaining a general nod towards social distancing.

On the field, the players stand in spacious 4-4-2 formations, with 12 metre gaps between each defender. One ballboy to cover each side of the pitch. Dots representing health staff, firefighters, police, groundskeepers. One densely-populated little area in the corner turns out to be the place where the TV rights holders, VAR teams and data teams sit; for some reason it is envisaged they will be packed together like battery chickens. At the back of the stand sit the ten best-connected journalists, only ten are allowed – imagine the vicious drama that would decide the allocation of each of these precious passes.

The league emphasised that this was still a working document, rather than a finalised one. Most of it consists of a series of precautions and stipulations that frankly sound more like the outcome of a brainstorming session than a serious plan. Maybe the teams could arrive on several buses each to leave more space between the players? Perhaps they should wear masks on the bus. In any case, the buses must be disinfected frequently. Have the teams take different routes to their dressing rooms? Leave extra space between each other in the dressing room? Split the team into sections – first team, goalkeepers, substitutes?

Teams should prepare their food in advance and bring it with them to the stadium. Doors should be left open, so people don’t have to touch the door handles. Elevator buttons should be pressed with the elbow. People should shower alone to avoid the possible spread of virus on droplets of steam, or maybe just wait until they get home to shower. Is it too obvious to point out that nobody should be sharing water bottles?

The most ironic instruction is probably: “IMPORTANT: In the stadium, public scrutiny of professional football teams and players may become even more intense than usual in the current situation. We urge you to behave in an exemplary manner with regard to the health and isolation guidelines outside the field of play.

Meanwhile on the field of play, the players will presumably be grappling with each other, screaming into the face of the referee, blowing jets of phlegm out of their nostrils, and so on. Okay, on one level this clearly makes a mockery of the rules everyone is supposed to be following. But to be fair, it will also help to liven up a lot of slow weekends.

German football has already faced intense criticism for putting forward these suggestions, as though it is shameful even to consider playing games while people are dying in hospitals and nursing homes. The tense atmosphere helps to explain the almost apologetic tone adopted by the league’s chief executive Christian Seifert, who keeps repeating that if football does resume it will be because the politicians have decided that it is safe to do so.

Some fans remain unimpressed by Seifert’s efforts to seem humble. Last week banners were hung outside Bayern’s Allianz Arena and at their old Olympic Stadium ground in Munich, with messages like “Even a pandemic can’t stop your greed: No to Ghost Games” and “Coronatests for risk-groups, not millionaire-toys.”

Really this is a continuation of the ideological war that has been going on in German football for several years, between those who support the 50+1 system of fan ownership, and those who believe the German game should be opened up for greater commercialisation and private investment.

One group, ProFans, released an impassioned statement attacking the media for dumbly playing along with the league’s “grotesque” suggestions for getting the show back on the road without the fans.

“Are leagues and clubs capable of learning from this absurd situation?” they wrote. “A league that generates incredible amounts of money faces financial collapse after just a few weeks’ worth of interruption to the normal schedule? This is exactly the point that we have been making for years: football is only about maximising profits for the few. The sport tramples its own values and has abandoned its fanbase. Whenever a crisis comes along the fans are useful for saving the club, but later their interests are ignored.”

For the game’s corporate powerbrokers, the situation could not be clearer. Whether or not there are fans in the stands, the basic fact is that the clubs need to play the games in order to get the TV money; without that money, football in its current form is finished. This is music to the ears of ultras, who see the clubs’ dependence on ever-growing income streams as an addiction that has to be broken. The coronavirus shutdown might just be the cold turkey therapy the league has needed for years.

These fans are quite prepared to see technical standards in German football fall if it means protecting the game from what they see as the malignant influence of big money. Cut and cap the ticket prices, cut and cap the salaries, protect 50+1. If that means the best German players go to England or Spain for the money, so be it – the game will survive without them.

‘Values of the masses’

“To be clear, the DFB and DFL will not be judged according to whether Germany wins the Euros or a German club wins the Champions League in the next few years,” ProFans argue. “The real question of the future is whether football will continue to worship solvent investors and their capital, or whether it will follow the will and the values of the masses who support it.”

Whether such groups really speak for “the masses” would be contested by the executives running the clubs. Remember that Karl-Heinz Rummenigge, as he denounced the actions of Bayern ultras at Hoffenheim a few weeks ago, before the virus shut everything down, described them as “enemies of football… they always say it’s our club – no, it’s not your club. We want nothing to do with them.”

Borussia Dortmund CEO Hans-Joachim Watzke claimed in an interview over the weekend that the game could either go ahead with the league’s unpalatable plan, or accept there will be no football at all until 2021. “If you reject this concept now, nothing will have changed in eight weeks… If there is no football played for a year, the lights go out everywhere – even at BVB.” A WDR poll last week found that 52 per cent of fans were in favour of restarting the league behind closed doors, with 30 per cent against. Nobody likes ghost games, but most still seem to feel they’re better than nothing at all.

1 Golf in Level 5 Covid restrictions: Clubs still waiting to hear if they can remain open
2 Hugo Keenan could start in changed Ireland team against Italy
3 Marcus Rashford is Man United’s hero in the Paris rain again
4 Wijnaldum attacks ‘stupid’ Pickford tackle on van Dijk
5 Here is your handy guide to sport on television this week
Real news has value SUBSCRIBE
Crossword Get access to over 6,000 interactive crosswords