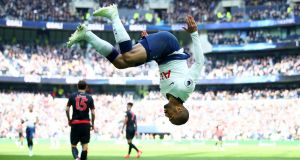 Lucas Moura fired a hat-trick as Tottenham continue to enjoy the comforts of their new home with a 4-0 Premier League win over Huddersfield that strengthens their top-four hopes.

Any fears they might have had about struggling to settle in at the Tottenham Hotspur Stadium have been convincingly quashed after making it three wins from three there, with Moura earning himself a place in history with the first treble in the 62,062-seater arena.

Victor Wanyama put Spurs on the road to an easy afternoon as they have now scored seven goals and conceded none back on their own patch.

The lunchtime win sends Spurs back up to third and with three of their remaining six league games at their new stadium, Mauricio Pochettino’s men will be confident of coming out on top of a thrilling four-way battle for Champions League qualification.

The routine nature of the win will also have been comforting to Pochettino, who was without the injured Harry Kane and Dele Alli and left man of the moment Son Heung-min on the bench ahead of the Champions League quarter-final second leg at Manchester City on Wednesday.

For Huddersfield, who saw Juninho Bacuna’s free-kick tipped onto the crossbar, this was their 19th defeat in 21 matches as they count down the matches until their Premier League journey ends.

Even in the absence of Kane, Alli and Son, it was an exercise of attack versus defence from the off as Spurs were camped in Huddersfield’s half, but with 10 men behind the ball the visitors were initially difficult to break down.

However, two goals in the space of three minutes eased any frustration and put Spurs in control.

Wanyama’s first goal since February 2018 broke the deadlock in the 24th minute as Fernando Llorente allowed Ben Davies’ pass to run into the path of the Kenyan midfielder, who rounded goalkeeper Ben Hamer and slotted home.

Moura swiftly made it 2-0 when he fired a low shot into the bottom corner after being played through by the impressive Moussa Sissoko.

Jon Stankovic had a chance to get Huddersfield back in it when he stabbed wide from a corner in a rare attack, but the traffic remained largely one way and Llorente passed up two good chances to extend the lead, the second a glancing header which went just wide.

The Spaniard, a beneficiary of Kane’s injury, came even closer to finding the net early in the second half as he superbly controlled Juan Foyth’s ball into the box and saw his instinctive volley rattle the crossbar.

Spurs had a string of chances to boost their goal difference but Moura drilled at Hamer, Llorente flashed another header wide and then also saw an effort blocked.

With Spurs beginning to get sloppy, Huddersfield posed more of a threat than they had done at any point and Steve Mounie drifted a header just wide before Hugo Lloris tipped Bacuna’s curling free-kick onto the woodwork.

The hosts remained a constant threat, though, and after Christian Eriksen saw his deflected effort strike the post after a quick breakaway, Moura killed the game in the 87th minute when he slid home Eriksen’s cross.

And he completed his treble in injury time, with a brilliant finish after being played through by substitute Son.