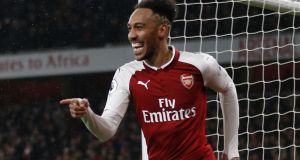 Given Thierry Henry’s status in the Arsenal pantheon, it is a big statement for Arsène Wenger to suggest that the striker Pierre-Emerick Aubameyang reminds him the most of the man who set the bar as the club’s record goalscorer. No pressure there, then.

In fairness, Wenger made a point of stressing that the likeness should be more of an inspiration than a comparison, a case of shared qualities rather than a facsimile. “It’s a bit too early to compare him to the best player ever who played here,” Wenger said. “He has played one game. But it’s a good example to follow.”

Aubameyang has already stated he regards Henry as a role model. “It is an ambitious statement but it is a good one,” Wenger said. “The best goalscorer ever in Arsenal’s history. It doesn’t mean he will score as many goals, but why not? Aubameyang has a tremendous quality of reception up front and quality of pace. It is a bit of what we need.

“His finishing is good. You don’t score by coincidence for so many years. But Thierry came a bit more to the ball as well, participated more in the game.”

After a goalscoring debut against Everton last Saturday, despite barely training and playing while he was under the weather, Wenger is hoping Aubameyang can raise his level for the expected intensity of Saturday’s derby. “He will be a bit sharper on Saturday than he was last week. He came in on Tuesday and we still had to keep him out of training because he had still not recovered from his sickness. [By the end of the week] he had a good session.

Wenger is pleased with how his new signing from Dortmund has settled in so far. “He looks to be a happy boy. Has a positive smile and very professional attitude. I met him a few times before by coincidence and he looks highly focused on his job.”