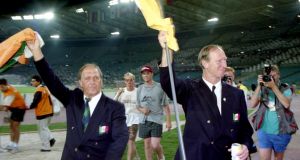 Ireland manager Jack Charlton and assistant Maurice Setters after the loss to Italy in the quarter-finals of the 1990 World Cup. Photo: Billy Stickland/Inpho

Jack Charlton was to the Republic of Ireland what Pelé was to Brazil. He defined the national team to the world, establishing a style against which all of the country’s sides since have been measured for better or worse. Charlton, Ireland’s first foreign manager, even helped to alter society.

The beauty of a game depends on the beholder. For nearly 10 years Charlton’s Ireland were hard to watch and harrowing to play against, yet they gave unprecedented joy to millions. He was fortunate that during his reign Ireland had some of the greatest players in their history but it took an exceptional leader to rally them. The manager, a surprising appointment following a farcical selection process, brought a charisma and a clarity of vision that had been missing.

From the start he showed he would do it his way. At his introduction in Dublin in February 1986, Charlton stormed out after arguing with a journalist and upbraiding the FAI’s general secretary. “If points have to be made,” he later explained, “they are more effectively made on day one.” His manner, like his style of play, split opinion but had the merit of being unambiguous. Players and spectators had to choose whether to join the ride or stay away.

Barely 15,000 fans attended his first match, a 1-0 home friendly defeat by Wales but by the time of Charlton’s departure he had earned honorary citizenship after leading the country to two World Cups and a European Championship, inspiring unheard of public jubilation and a cultural expansion.

The celebrations are more memorable than the matches. Charlton unapologetically preached a strategy based on long balls and relentless harassment of opponents. It was not high-brow but it was well thought out. Every player knew his role and if he did not perform it to Charlton’s liking he was ditched, no matter his stature. Liam Brady, an all-time Ireland great, was humiliatingly hauled off 35 minutes into what turned out to be his final international, a friendly against West Germany.

Against Scotland at Hampden Park in 1987 he fielded an unorthodox lineup and achieved Ireland’s most significant away win for nearly 40 years, paving the way for Ireland’s first appearance at a major tournament. Euro 88 began with an extraordinary triumph against their oldest rivals, England, the country with whom Charlton had won the World Cup as a player but whose Football Association had never given him the courtesy of a reply when he applied for the position of manager after the departure of Don Revie, once his mentor at Leeds. Ray Houghton’s winning goal served as payback and a new dawn.

Charlton’s tactics made even the best teams uncomfortable but his greatest achievement was to get his players to implement his plan with gusto even though many of them were asked to play against the instincts that had made them successful at club level, from John Aldridge being converted from a goal-getter to a ball-fetcher, Ronnie Whelan being made more a runner than a passer and Paul McGrath (like Mark Lawrenson before him) being recast as an outstanding midfielder rather than a world-class centre-back.

Such players enjoyed playing under Charlton because, as much as his system was rigid and the FAI’s support was often shambolic, reporting for international duty felt like going to a theme park. There was a giddiness around the Boys in Green.

While other teams were cloistered away, Ireland’s players were allowed to party in the same pubs and clubs frequented by fans. When they trained it was with a definite purpose but little sophistication: their preparation for the anticipated heat of the 1990 World Cup in Italy involved running around wearing three tracksuits and a big overcoat.

“Under Jack we were mostly ramshackle and part of what made us tick was the disorganisation and the joy we got from pretending to the world that we weren’t to be taken seriously,” Niall Quinn wrote in his autobiography. Being seen to work hard and have fun, while gaining good results, made them lovable. A nation was happy to identify with them.

That identification also had liberating implications. Since long before Charlton’s arrival football had been the people’s game in Ireland, especially in urban areas, but many in authority – in schools and churches - had denied that reality, insisting football was an impostor and Gaelic sports were the only true mode of Irish expression. That lie was exposed in the Charlton years, impossible to uphold when the whole country stopped to watch the team play and poured into the streets to welcome them home from tournaments.

The team’s popularity helped to propagate a more inclusive definition of Irishness in other ways. Charlton was not the first manager to recruit foreign-born players with Irish ancestry but he did so more than any other. There were some heckles about players with English accents representing Ireland but most of the sneers about “plastic Paddies” came from the British media.

Generally in Ireland the foreign-born players who chose to represent the country were embraced as sons of the diaspora, especially as the spirit with which they performed invalidated allegations of opportunism.

In later years decisions by Jack Grealish and Declan Rice triggered a sad and hypocritical narrowing of some minds in Ireland but Charlton’s side were seen mostly as every bit as Irish as the London-born Shane MacGowan, whose band, the Pogues, provided the soundtrack to many a hooley.

With the song Fairytale of New York in Ireland’s opening match of the 1994 World Cup, Charlton’s team reached their sporting and cultural pinnacle. The Big Apple practically became the capital of Ireland that day as millions of Irish people tried to get tickets for a meeting in the Giants Stadium with Italy, another country that had a huge exclave in the US. In the end there were far more Irish in the crowd of 75,000 and Houghton again ignited sessions that are still talked about today.

Ireland did not win another game at USA 94, where they ultimately suffered from the heat and a lack of quality in a couple of key areas. While Charlton benefited from a vintage crop of players, he never had a great goalkeeper and suggestions that he should have delivered even better results are not strengthened by the fact Ireland’s best performances – matches in which his side outplayed decent opponents instead of ambushing them – yielded only draws: with the USSR at Euro 88 and away against England and Poland in the qualifiers for Euro 92.

Charlton would have liked to have concluded his reign by taking his team to a tournament in his native country but Ireland, with precious players missing or waning, failed to reach Euro 96. With more limited players Charlton’s style looked more limited. He showed little inclination to evolve, whereas expectations had changed.

After defeat by the Netherlands in a play-off in December 1995, fans sang him a ballad that felt like farewell. Then, with a lack of sentiment that surprised Charlton but of which he might have grudgingly approved, the FAI sacked him just short of his 10th anniversary. – Guardian