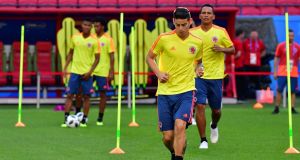 Quarter-finalists four years ago when James Rodriguez scored six times and won the Golden Boot, Colombia and their 26 year-old star would most likely be on their way home if they fail to take three points from their second group game.

Fortunes do fluctuate from tournament to tournament, of course; Lionel Messi was voted the best player in Brazil and that doesn’t seem likely to be repeated this time around as things stand.

That Colombia’s opponents, Poland, are in precisely the same position after losing 2-1 to Senegal gives the Group H game in Kazan on Sunday evening more than a touch of make or break.

“It’s them or us,” acknowledged defender Santiago Arias whose team-mate Carlos Sanchez received a death threat in the wake of his sending off three minutes into the defeat by Japan.

Arias suggested that the main conclusion of the team’s review of that game was that it is difficult to play with 10 men and his coach, the Argentine World Cup veteran José Pekerman, insists the plan is to keep them all out there this time.

“We are very focussed this time and the number one priority is that it’s going to be 11 players against 11, because that’s the way football works,” said the 68 year-old.

The South Americans seem set to have Rodriguez, who got just about half of their goals in qualifying, sufficiently recovered from injury to start this time, and if his return is like having an extra man - Polish playmaker Piotr Zielinski described his as the team’s “locomotive” - then the South Americans might even feel like they are playing with 12.

Their fans, who have travelled in huge numbers to support them, will certainly hope so. The tournament has not been going so well for the continent so far and Colombia currently face the prospect of, like Peru, heading into their last group game with nothing to play for.

If Rodriguez starts then they will certainly have enough attacking talent to trouble a side that conceded more goals that any other European group winner and didn’t look so great in that department against the Senegalese.

Juan Cuadrado provides pace and a bit of trickery pushing forward from midfield while there were high hopes within the camp that skipper Radamel Falcao might have a good tournament after having enjoyed quite a revival over the last couple of seasons at club level.

The Poles, though, generally score a few too and Robert Lewandowski comes into this game with a remarkable 21 goals in his last 16 international outings.

“We were very angry after the last match so we want to play now at a different level,” said coach Adam Nawalka who seemed intent on making it absolutely clear ahead of his squad’s training session that whatever happens on Sunday, the players have been well prepared. “Actions speak louder than words,” he maintained, in any case, “and we are determined that our response will be to present ourselves in a very different way.”

Falcao’s Monaco teammate, Kamil Glik, who missed the opening game with a shoulder injury, is expected to return to the heart of the Polish defence in place of Thiago Cionek whose own goal set the Africans on course for victory in Moscow on Tuesday while Jakub Blaszczykowski seems set to start again despite having come off injured in that game.

1 Paul Stirling’s heart over head decision to play on for Ireland bears fruit
2 Leo Cullen says rotation will be key as Leinster look to keep on winning
3 Owens’s comments increase tensions ahead of FAI senior council meeting
4 Sporting Cathedrals: Le Stadium - European fortress of the mighty Toulouse
5 Harding Park, named after a lousy US president who never stepped foot on it
Real news has value SUBSCRIBE
Crossword Get access to over 6,000 interactive crosswords