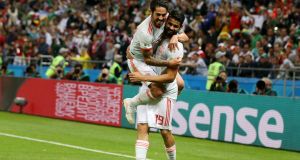 Fernando Hierro might reckon that Diego Costa can do even better at this World Cup than the three goals in two starts that he has managed so far, but as Spain prepare for Monday’s final group game he would probably settle happily enough for the 29-year-old simply maintaining the current run.

After years of his predecessors employing false number nines or ones that didn’t quite live up to the quality possessed by their teammates, the interim coach suddenly finds himself at this tournament with a natural for the role who is firing on all cylinders.

Costa’s contribution to the draw with Portugal may have been eclipsed by Ronaldo’s performance in the game – and his goal against Iran widely derided as a fluke – but with Spain on the brink of a place in the knockout stages the Atletico striker is suddenly at something approaching his menacing best.

For Hierro it represents a handsome return on the hunch he backed by starting the Brazilian-born star against the European champions last Friday. The coach is a long-time admirer of the striker, and had suggested four years ago that Costa’s failure to shrug off an injury in order to play at the 2014 World Cup might prove disastrous for Spain.

Instead, the then 25 year-old recovered, travelled and contributed next to nothing as Spain crashed out. He made his competitive debut in the opening game against the Netherlands and, to be fair, won the penalty from which Xabi Alonso put the defending champions in front. Yet they lost 5-1, and Costa looked completely lost in the second game, a 2-0 defeat by Chile. With the team already out, he was dropped for the third group game so that the retiring David Villa could be given a send off.

Costa failed to make the squad for Euro 2016 in France where the strikers Vicente Del Bosque had preferred to him generally disappointed. As the team trailed Italy in the Round of 16, few of their fans can have been inspired by the sight of Aritz Aduriz – then 35 and with a solitary international goal to his credit – coming on for Nolito.

After replacing Del Bosque, Julen Lopetegui brought Costa back into the fold, and he finished the qualification campaign as one of four joint top scorers along with Alvaro Morata, Isco and David Silva, all of whom got five.

Morata, almost his polar opposite in terms of style of play and too nice by half it seems at times by comparison, didn’t even make the squad, and it was actually Iago Aspas, once of Liverpool, who was putting the strongest case for himself in the run up to the tournament by finishing the league season in Spain as the top Spanish scorer – 22 for Celta Vigo who finished 13th in the table – while Costa, managed just one, against Arsenal, of course, in the Europa League, since the middle of March for Atletico. He would, in truth, have had few complaints had the 30-year-old been preferred against Portugal.

Yet amid all the chaos of Lopetegui’s departure, Hierro stuck with the former Chelsea star, and the coach must have been ecstatic with Spain’s first goal, the product of a long ball forward and a fierce determination by the striker to get the better of Pepe.

It was the antithesis of what Spain are supposed to be about, and Portugal it seemed should have had a free, but there was no faulting the way Costa stuck away what was his first competitive international goal against really good opposition.

His second, a close range conversion that demonstrated his ability to get goalside of defenders in much tighter situations, was a classic striker’s effort and while he mightn’t have known too much about the one against Iran it had a lot to do with the panic Ramin Rezaeian experienced at having Costa breathing down his neck in such a dangerous area.

Spain now need only a draw against Morocco to be sure of their place in the last 16, where perhaps the most alarming possibility would be having to take on the hosts in front of full house at the Luznikhi stadium. Beyond that Belgium, England, Argentina or France might be quarter-final opponents, but the evidence so far suggests that Hierro has the quality at his disposal to beat any of them really if the coach can harness the best aspects of the performance against the Portuguese.

Costa’s sudden rediscovery of his best form certainly seems to solve an inherited problem for the former Real Madrid star. The 29-year-old’s knack for battling his way into wide open spaces may not seem ideally suited to a team whose opponents routinely sit deep, but Costa’s renewed ability to occupy multiple defenders in a far advanced role might well give Spain something they sorely missed at their last two tournament outings, both of which ended in early disappointment.

“I’m really happy with him,” said Hierro in the wake of the win over Iran. “The way he works, the way he commits, the way he fights. If you have players who are committed, things always look brighter.”

No manager can ever have been unhappy with Costa when he is looking like this, although almost all who have worked with him know how quickly things can change with a player who has a remarkable ability to see himself as a victim when it suits him.

At his best, though, he seems as driven as anyone at this World Cup to succeed, and Hierro will not have to remind him how close he could yet be to what would be the greatest moment of a relentlessly eventful career.

1 Gerry Thornley: Ireland don’t want to box themselves into a corner
2 Kevin McStay: Maybe a knockout All-Ireland Championship is the long-term solution?
3 The Offload: Ireland are stuck in no man’s land
4 New Killarney athletic track another jewel in the Kingdom’s crown
5 Fernandes on the double as Manchester United get their revenge
Real news has value SUBSCRIBE
Crossword Get access to over 6,000 interactive crosswords