World Cup 2018 travel guide: All you need to know

From getting tickets, to transport, to accommodation and more for next summer 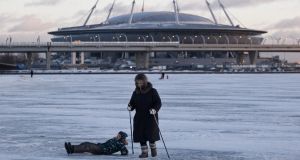 The Zenit Arena stadium surrounded by ice. It is one of the 12 venues that will be used for next summer’s World Cup. Photo: Valya Egorshin/NurPhoto via Getty Images

When do tickets go on sale?

Tickets available in the first ballot have already come and gone with applications open from September 14th to October 12th. After that everyone who had applied was informed whether or not they had been successful. To give a measure of how much demand there is for tickets, Fifa reported that there were 3,496,204 tickets requested in that first phase alone.

However, there is still plenty of time to get tickets and still plenty of tickets to get. On December 5th, 2017 the second random ballot opens and you can apply up until January 31st, 2018. Tickets in this ballot will be decided by a random selection draw.

Following that there are two more sales phases before the finals begin. From March 13th to April 3rd tickets will be available on a first-come-first-served basis.

How do I apply for tickets?

To begin with you must create an account with Fifa by clicking here. After that you enter all of your details (note that you will also need your passport details) and your payment information. You then select which tickets you would like to purchase (if it’s during a first-come-first-served phase) or apply for (if it’s during a random draw phase).

If you are successful in getting tickets you then must apply for a Fan ID through the Fifa website.This is a free official identity document required by the Russian authorities. It acts as your visa to get into the country and also entitles you to free public transport on matchdays.

What tickets can I get?

There are three types of tickets on sale which are then divided up into categories. Tickets can be purchased for specific games, for specific venues or to follow a specific team. So, for instance, if you select England under the Team Specific Ticket Series (TST) option then you can apply for any amount of games from the three group games to all seven possible games if England were to advance all the way to the final or the third-place playoff. However, it should be noted that you will not receive a refund if your team is eliminated before the final.

Individual match tickets are self-explanatory but you won’t know which teams are actually playing in each match until after the World Cup draw on December 1st.

Venue specific tickets (VST) entitle you to attend matches at the stadium of your choice throughout the group stages, the last 16 and the third-place playoff. Quarter-finals, semi-finals and the final are not included in VSTs.

What price are tickets?

For the final the cheapest tickets available to those who aren’t Russian residents are priced at $445 (about €380) with the most expensive priced at any absolutely eye-watering $1,100 (about €945). Clearly the joy of seeing your team at a World Cup is reserved only for the privileged few.

All ticket prices can be seen in the graphic below with categories one, two and three priced in US dollars while category four is priced in Russian rubles as they are specifically for Russian citizens.

What cities are being used for matches?

Are there direct flights from Ireland?

As of now there are very limited direct flights from any airport in Ireland to Russia. S7 Airlines offer flights from Dublin to Moscow on Saturdays during the summer but that’s about it.

So what other options are there?

That all depends on what cities you’re planning to go to which, in turn, depends on the draw on December 1st. From Ireland, Moscow and St Petersburg are the easiest to access with direct flights available from London if you fly there first. British Airways fly every day from London Heathrow to both cities while Aeroflot have numerous flights to Moscow each day from Heathrow with one evening flight also from London Gatwick.

Kaliningrad is also one of the easier cities to get to as it is not actually located in mainland Russia. The area was formerly known as Prussia and is a Russian exclave located between the north of Poland and the south of Lithuania. The city is just under 170km from Gdansk in Poland and 260km from Vilnius in Lithuania, both of which can be flown to directly from Dublin with Ryanair.

For the other eight cities there are still plenty of options but they’ll take a bit more work.

Direct flights from Dublin to cities such as Vienna, Prague, Riga, Tallinn, Vilnius or Warsaw cover connections to each of the other nine destinations. Skyscanner will cater for all of your needs there.

But don’t you need a visa to get into Russia?

Normally you do but these regulations have been changed somewhat for the World Cup. If you are successful in buying tickets you will the apply for a Fan ID on the Fifa website. This acts as your visa to get into the country.

How do I get between cities?

The numerous Russian airline companies offer plenty of options for internal flights and, given the distances involved, it will be the only way to travel between a lot of cities. Aeroflot, Globus Airlines, Nordstar, S7 Airlines and Ural Airlines are some of the main ones but there are plenty more options as well. Pobeda is the Ryanair of Russia and offers the cheapest fares with no frills attached to the majority of cities around the country.

For travelling between some of the cities located closer together the train would be a better and cheaper option. Tickets can be purchased on the Russian Railways website (http://www.rzd.ru/).

What is public transport like in the host cities?

In Moscow and St Petersburg the huge metro systems are efficient and easy to use while there are smaller ones in Kazan, Nizhny Novgorod, Samara and Yekaterinburg.

In each of the other five cities you will have to rely on the bus network or else the taxi service. Taxis are easy to book using the apps Gett or Yandex Taxi and also ensure that you won’t be ripped off.

Another benefit of the Fifa Fan ID is that it entitles you to free public transport on matchdays in each of the host cities.

What currency do they use in Russia?

Russian rubles are the local currency and can be quite complicated given that one rubles is worth just 0.014 cent at the time of writing. Currently €50 would get you just under 3,530 rubles.

This is where things could become expensive. Even though the draw is still yet to be made, the dates of each match in each city are already known. Because of this, hotels are already able to hike up their prices. While the bigger cities such as St Petersburg and Moscow offer plenty of options, rooms could become scarce if, for instance, Germany play England in the quarter-finals in Nizhny Novgorod. Many hotels have also already been block-booked by Fifa.