Women’s football on the cusp on something big

Given proper support, major breakthrough can’t be too far away 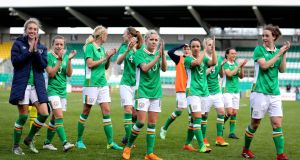 The Irish players acknowledge the crowd after the game in Tallaght. Photograph: Ryan Byrne/Inpho

Like many Irish soccer fans and other fair-minded people I was outraged at last week’s revelations about the shabby - even humiliating - treatment of the Irish women’s international soccer team at the hands of the FAI. I became even more angry at the unapologetic arrogance of FAI chief executive, John Delaney, in his weekend claims that a mediator had been in place and therefore there had been no need for the team’s unprecedented press conference to air their grievances last Tuesday.

I was also impressed by calls from a number of the players that people should not just express support for their entirely legitimate demands to be treated with dignity and fairness by the FAI, but should also to come and watch them play. So on Monday afternoon I went to Tallaght stadium to watch the team beat Slovakia 1-0 in a friendly. Although I have been a follower of the Irish men’s team for over 60 years, home and away, I am ashamed to admit that this was my first women’s international. I wonder how many other lifelong Irish soccer fans have never been to see the women’s team play.

Scheduling an international kick-off for 2pm on a Monday afternoon was not exactly guaranteed to maximise the attendance, although there was a noisy representation from schoolgirls on the first day of their Easter holidays. In the event just over a thousand people turned up, including the Minister for Sport, Shane Ross. It wasn’t a brilliant match, with the main difference between the teams a soft penalty, efficiently despatched by Stephanie Roche.

However, for me it was a revelation. Women’s soccer has come on hugely in recent decades. For a man who was brought up at a time when girls could barely kick a football - or more to the point, were barely allowed to kick a football - it was a genuine eye-opener to see these wonderfully strong and athletic young women, most of them amateurs, perform at a level not that far below the highly paid full-time professionals of the men’s game. They are powerful role models for girls growing up in these thankfully more emancipated times.

This was as entertaining as anything I have seen at Lansdowne Road in recent years (with the exception of the victory over Germany). These girls are fast, skilful, determined and take no prisoners in the tackle. Katie McCabe was particularly outstanding - a marvellously gifted dribbler and forceful right-winger, who if she were a man would certainly be an ever-present in Martin O’Neill’s team. Denise O’Sullivan is a stylish and tigerish midfielder. Stephanie Roche of that ‘overhead flick and volley’ goal of world renown is the main threat up front - although, just like the men’s team, a little more firepower would be particularly welcome.

As manager Colin Bell said after the match, this team has a way to go. However, with the right leadership and nurturing - and this may require a change of attitude by the much-maligned soccer authorities - this talented group of women can’t be that far away from qualification for a major tournament. Meanwhile, a few more of the tens of thousands of Irish male supporters who regularly fill Lansdowne Road should give these impressive ‘girls in green’ a look. Treat yourselves and go along to the next women’s international against Iceland on June 8th. I, for one, will be trying to gather the group who went to France with me for Euro 2016 last summer, to reveal to them the genuine pleasures of Irish international women’s football.

Andy Pollak is a former Belfast reporter, religious affairs and education correspondent with the Irish Times.