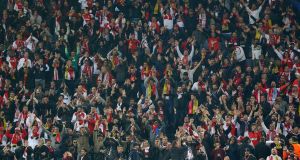 Borussia Dortmund and Monaco supporters showed their solidarity in the wake of Tuesday night’s attack on the Dortmund team bus as visitors from the south of France forced to spend another night in the German city were offered emergency accommodation via social media using the hashtag #bedsforawayfans.

Within minutes of confirmation that the Champions League quarter-final first leg will be replayed on Wednesday night, the Bundesliga club sent out a tweet informing Monaco supporters that a scheme to house them for the night was already under way. That was followed soon after by an offer from the Ligue 1 side to subsidise their fans up to €80 to stay in local hotels before the rearranged game, which will kick off at 5.45pm Irish time.

Several supporters heeded the rallying call, with some posting pictures of the two groups of fans enjoying a meal together. “If someone still needs a place to sleep for tonight in Dortmund, don’t hesitate to contact me,” wrote journalist Thomas Thiel.

Earlier, police had praised the reactions of supporters inside the Westfalenstadion for their calm reaction to being evacuated. “Big kudos to all stadium visitors. Almost all have left the stadium without any problems and are on the way home,” read a tweet from the local police account.

Dortmund’s chief executive, Hans-Joachim Watzke, added: “I have to express a huge compliment to our fans, who have dealt with it very well, objectively, reasonably and solidly.”

Despite police revealing they had discovered a letter near the scene of the crime which contained a claim of responsibility for the attack, the Dortmund president, Reinhard Rauball, backed the club’s players to put the episode behind them and concentrate on their meeting with the side who beat Manchester City in the last 16.

“Of course this is an extremely difficult situation for the players,” he said. “But they are professionals and I am convinced that they will put that away and will bring their performance tomorrow. It would be a bad thing for those who did that to succeed, because the team is influenced in some way.”