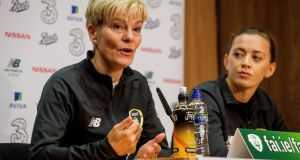 Vera Pauw is confident that her Irish women’s team can finish second in their European Championship group, but says that losing at home to Ukraine in Tallaght on Tuesday night would be a slip-up they cannot afford at this early stage of the campaign.

“The group has developed in exactly the way that you would expect,” says the recently appointed Dutch coach on the eve of her game in charge. “They are by far the best team, eight times European champions, two time world champions and they are a team on the rise again. Against Ukraine (over the weekend, when they won 8-0 to make it 26 goals scored, none conceded after three games) it was a very dynamic performance.

“So this is all about second place; that is the reality. We must have a positive result between us and Ukraine. That means we must not lose and if that means that during the game we decide a draw is a positive result then that is okay. There is some space there.

“For now, we go into the game aiming to win, that will always be the case, but we must not lose tomorrow.”

Ireland are, in fact, the only other nation in the group with any points. The team, then managed on an interim basis by Tom O’Connor, beat Montenegro in their only outing of the campaign so far.

Pauw has a full squad to choose from, with Megan Campbell’s return from injury a particular boost for the group, although she is still, she says, weighing up whether a couple of the players are fit enough to get through 90 minutes, something that will influence her first team selection in the job.

She is, however, happy with the preparations so far and suggests that much of the time she has had with the players on the training ground has been put into ensuring that they are more positive and “purposeful” when in control of the ball.

“Yes, we have been working on our use of the ball when the players have possession; we want to be more purposeful in our play so that our passing has more meaning and there is more pressure put on our opponent. I have been really, really impressed with everything , though, and we are very well on track to do what you want to get done in a week.”

Pauw appealed to would be supporters in possession of tickets for the game, which is a sell out, to use them or give them to somebody else who will. “There is a heavy wind predicted for tomorrow night,” he said. “You might hesitate to go out: ‘will I go out with my children?’. But please come. We need your support. And if you are not going to come then give your tickets to somebody who will. Ireland needs every bit of support for this game.”

Team captain, Katie McCabe, echoed that sentiment; insisting that despite two hefty defeats by the group’s top seeded side, Ukraine are a “tall and powerful team” that will present a challenge. But she says, “we know how Vera wants to bring us forward and we are all really keen to get going on it tomorrow night.”

1 Paul Stirling’s heart over head decision to play on for Ireland bears fruit
2 Owens’s comments increase tensions ahead of FAI senior council meeting
3 Leo Cullen says rotation will be key as Leinster look to keep on winning
4 Sporting Cathedrals: Le Stadium - European fortress of the mighty Toulouse
5 Harding Park, named after a lousy US president who never stepped foot on it
Real news has value SUBSCRIBE
Crossword Get access to over 6,000 interactive crosswords