McCarthy due more appreciation for his sterling service to Irish football

Both as a player and a manager, Barnsley native has given his best for the Republic 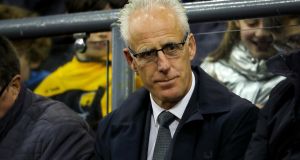 Mick McCarthy: Why isn’t he appreciated more in Ireland? Is it the gruff Yorkshire accent and ways– or is it the lasting legacy of his famous Saipan rift with Roy Keane. Photograph: Oisín Keniry/Inpho

It’s a hobbyhorse of mine that the sole reason Mick McCarthy hasn’t been clasped more firmly to Ireland’s sporting bosom is his accent.

On Saturday the man who sounds like he should be down a Yorkshire mine will instead be in Georgia for his 75th game as the Republic of Ireland’s soccer manager.

A good result there would tee up a critical couple of games against Switzerland and Denmark that could see the country’s football team beat the odds and qualify directly for Euro 2020.

With the current group of players at his disposal, such an outcome might represent the crowning glory of a 27-year managerial career that previously included taking this country to the 2002 World Cup.

Considering that as a player he played in Euro 88 and captained Ireland to the 1990 World Cup quarter-finals it can be argued no one in the history of the game here has achieved more, or contributed more, to Irish international football.

His commitment saw weekend speculation about a possible move back into club management with Stoke dismissed almost in the same breath as it arose.

One might imagine the sum total of all this should have the country talking about McCarthy in national treasure terms: maybe not Katie Taylor levels of infatuation but in a similar category of affection to someone such as Paul O’Connell.

Yet there remains a curious ambivalence about McCarthy that in all likelihood he himself would bluntly claim to not give a damn about.

Some of it inevitably revolves around Irish sport’s most notorious melodrama in Saipan which for many became a no-contest in terms of popular appeal.

Roy Keane was at the peak of his career as one of the world’s finest players at the world’s most glamorous club.

He was the attractive rebel, railing at authority, the misunderstood hero lashing out at mediocrity with a cutting precision that a Cork accent only seems to emphasise.

McCarthy’s lot was to be counterpoint to that, a suit on the sideline authority figure explaining to the world why he’d sent home his best player. And in that slow, undiluted Barnsley drawl too.

Of course Keane pounced on that open goal, famously proclaiming his nemesis to be a crap player and a crap manager before reputedly delivering the killer line – “and you’re not even Irish, you English c**t”.

It was a low, heat-of-the-moment blow and regurgitating it feels like dirty pool. Not many of us would emerge squeaky clean at angry words being repeated back almost two decades later. But it resonated then and perhaps still does now in popular perceptions of McCarthy.

His own response to such nationality jibes has always been impressively lucid, acknowledging obvious differences but undercutting their significance in relation to his Irish credentials.

“When people questioned me about my Irishness I used to say to them ‘if you left Ireland to live abroad and had children, and your son was good enough to represent Ireland in any sport, would you think he’s Irish and able to play for them?” he has asked.

It’s inarguable logic. But even reading it conjures that dour monotone which time admirably hasn’t managed to dilute an iota.

It’s a mimic’s dream packaged in a million cultural stereotypes from a north of England cartoon that’s all flat caps, whippets, and, ‘Eh Oop’ Monty Python ‘Four Yorkshiremen’ sniggering. What it isn’t is Ireland.

So if it’s true that national treasure status is rooted in public wish fulfilment about how we like to view ourselves then that obviously isn’t how most Irish people see themselves.

Instead it is Keane’s ferocious refusal to play the bullshit game, through the spectrum to Taylor’s sincere humility, pausing en-route at Paul McGrath’s vulnerability, or a salt of the earth figure such as O’Connell, that chimes with our self-regard.

Except McCarthy’s career is testament to all of those things, just modulated differently.

The low bullshit threshold is famous. Then there’s the wit and refusal to take himself too seriously.

He famously said of Saipan: “I said at the time, one day I’ll be walking down the street in Barnsley, a flat cap on, ferret in my pocket, Jack Russell do by the side of me, and someone will say ‘There’s the bollocks who sent Roy Keane home!”

If there’s nothing we like better in Ireland than a trier then McCarthy’s football career is testament to squeezing the maximum out of himself.

Keane was a much better player but McCarthy turned himself into a top-flight performer too, and subsequently a much more successful manager. The fact one is in charge of the national team this week while the other is beleaguered in a studio talking head role is stark proof of that.

Through that managerial career at Wolves and Sunderland in particular, but also with Ireland, has been abundant evidence of a football intellect far removed from the agricultural long-ball policy he became synonymous with during the Charlton years.

Then there’s the personal decency that even his fiercest critics don’t deny, summed up last week in a refusal to jump on the Richard Keogh bandwagon.

Stating the obvious in that Keogh made a mistake in getting into a car driven by a drunk colleague didn’t prevent McCarthy from also pointing out the sanctimony in some of the more extreme condemnation of his injured centre-half.

Whether such fury would have directed at Keogh were his own accent from closer to home than Essex is another possible hobbyhorse. Mistakes involving alcohol are hardly new for Irish football internationals and have often been viewed with a lot more indulgence over the years.

It’s 35 years since McCarthy first pulled on a green shirt. In the intervening period he has seen memorable successes mixed with vituperative lows.

But, as he ventures into another critical week in charge of the national team, time now surely allows greater acknowledgement of a staunch Irish man whose overall career represents vindication in any accent.

1 Cheltenham faces criticism after racegoers suffer Covid-19 symptoms
2 Ian O’Riordan: Learning to run for the first time all over again
3 Coronavirus crisis could cost the GAA up to €60 million
4 Avoid the treadmill at all costs – marathon training in the 2km radius
5 Sport will be the last duck in the row, Shelbourne’s triumphant return
Real news has value SUBSCRIBE
Crossword Get access to over 6,000 interactive crosswords