‘If we believe people are attacking him, as has happened in this press conference, then we’re going to defend him’ 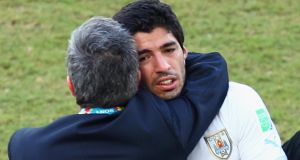 Uruguay manager Oscar Tabarez claimed that Luis Suarez “is the target of certain sections of the press” after the Liverpool striker provoked another moment of controversy by appearing to bite Giorgio Chiellini during his side’s 1-0 win over Italy.

Tabarez insisted he had not seen a replay of the incident, which took place moments before Diego Godin’s match-winning header in the 82nd minute which saw the South Americans qualify for the second round of the World Cup, but went unnoticed by match referee Marco Rodriguez Moreno.

Italy midfielder Claudio Marchisio had been given a straight red card on the hour mark for a stamp on Eligio Alvarelo, and Chiellini was adamant that Suarez should have also been sent off for the bite.

However, Tabarez backed Suarez in his post-match press conference. “I would like to see it (a replay of the bite) first,” said the manager. “If it happened then I think the referee had to have seen it first. I didn’t see the incident and I don’t want anyone to speak for me about it.

“Suarez, in addition to errors that he may have made, is a target for certain sections of the media.”

“If we believe people are attacking him, as has happened in this press conference, then we’re going to defend him,” he said. “He’s a vital player, a very important person to the group.”

Suarez was banned for seven matches for biting an opponent while playing for Ajax, and last year was suspended for 10 Barclays Premier League games for biting Chelsea defender Branislav Ivanovic.

Fifa has announced it will investigate the alleged incident with Liverpool’s Uruguay striker likely to face a lengthy ban if found guilty.

Fifa’s disciplinary code sets a maximum ban of 24 matches or two years, but the longest ban in World Cup history was eight games for Italy’s Mauro Tassotti for breaking Spain’s Luis Enrique’s nose in 1994 with an elbow.

Following the result and Italy’s elimination, manager Cesare Prandelli told a press conference that he is going to resign.