Time right for Suárez to assume centre stage once again

With Cavani’s fitness in doubt, Uruguay will look to record scorer to unsettle France 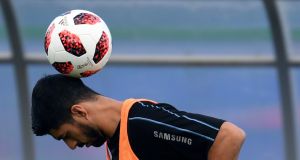 Luis Suarez during a training session on the eve of Uruguay’s quarter-final against France at the Nizhny Novgorod Stadium. Photograph: Martin Bernetti/AFP/Getty

A deliberate handball on the line to stop Ghana going through to the World Cup semi-finals in 2010. A bite of Giorgio Chiellini’s shoulder in 2014.

Four years and as many World Cup appearances later and we are still waiting to discover what Luis Suárez’s legacy will be in Russia, where Uruguay’s talisman has another – and possibly a last – shot at redemption on football’s greatest stage.

By Suárez’s World Cup standards – and what standards they are – the striker has been relatively quiet.

Poor in the opening game against Egypt, he went on to score against Saudi Arabia and Russia and also provided that terrific cross for the first of Edinson Cavani’s two goals against Portugal in the last 16 last Saturday. Yet it is his strike partner, born a few weeks after him, who has stolen the show. Cavani has scored more, shot more and run more than Suárez in Russia, despite spending less time on the pitch.

Suárez is not the sort of player to stay in the shadows for long, especially when it comes to representing his country. Uruguay’s all-time leading scorer has a habit of serving up memorable storylines when he pulls on the sky blue shirt, in particular at World Cup finals, and his country could do with another, only this time with a much happier ending.

Controversy stalks Suárez but, love him or loathe him, his scoring record is phenomenal. With 53 goals in 103 internationals, he averages better than one every other game for his country.

At club level the figures are staggering. In the last five seasons, which comprise one campaign at Liverpool and four with Barcelona, Suárez has scored 141 league goals. To put that return into perspective, the only players to have scored more in Europe’s top five divisions are Lionel Messi and Cristiano Ronaldo. Next on the list after Suárez comes Robert Lewandowski, followed by Cavani, which gives an idea of how just blessed Uruguay are when it comes to their forward line.

Yet the frustration for Uruguay is that they have never been able to field that formidable partnership at a World Cup when it really matters. Suárez missed the 2010 World Cup semi-final defeat against the Netherlands through suspension after stopping Dominic Adiyiah’s goalbound header for Ghana, in the last minute of extra time, with his hands. “The hand of Suárez” is the title of that particular chapter in his autobiography. “The hand of the Devil” read a headline in a South African newspaper the next day, after Uruguay went on to win on penalties.

Four years later, in Brazil, Suárez was sent home in disgrace after that extraordinary Chiellini incident, leaving Uruguay to face – and lose to – Colombia in the last 16 without him.

Watching from his house in Montevideo, where tears rolled down his face as he listened to Óscar Tabárez, the Uruguay manager, defend him on the eve of the Colombia tie, Suárez knew what the outcome would be 24 hours later.

“You could see that emotionally the team had died,” he wrote in his book.

Russia had promised to be different, especially when Cavani scored his second against Portugal after linking beautifully with Suárez for the first, but once again Uruguay are facing the prospect of going into a defining game without their front duo. Cavani, who limped off against Portugal with a calf injury, is a major doubt for today’s quarter-final against France.

The Paris Saint-Germain forward trained in Nizhny Novgorod yesterday but those words read much more positively than the picture Tabárez painted at his press conference. Tabárez was extremely coy about whether Cavani will be able to play any part against the country where the forward has lived for the last five years, so much so it was hard to escape the feeling, at the end of the manager’s contribution, that the best Uruguay can hope for is the 31-year-old is named among the substitutes.

Sounding drained by the whole subject of Cavani’s fitness, Tabárez said: “He is very sad because he is suffering an injury during a World Cup. He’s a very important player for us and he was playing really well. So as soon as he got injured, he started working hard to recover.

“He’s concentrating on his dreams and his hopes. But I’m not going to say anything else about Cavani and I don’t want to get into any games. In less than 24 hours you will know. Some people are saying we are trying to pretend. We’re not. We don’t want to create any doubts.”

Suárez never got a mention as Tabárez, an eloquent and erudite man, turned his attention to life at the other end of the pitch, where Uruguay, who have conceded only once in this tournament, will surely make life a lot more difficult for France’s attack than Argentina did.

“What I can tell you,” Tabárez said, “is that we really count on our defence.”

At the same time Tabárez knows that Uruguay, with or without Cavani, will need a huge performance from their number nine. For Suárez, who will be 35 by the time the next World Cup comes around, there will be no shortage of motivation as he seeks to bury the memories of all the chaos and controversy that has gone before.