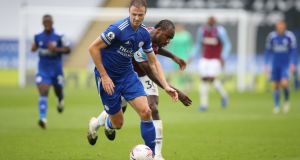 Jonny Evans is expected to be fit for Northern Ireland’s crunch Euro 2020 qualifying playoff against Bosnia and Herzegovina on Thursday, manager Ian Baraclough has said.

Evans took a knock in Leicester’s Premier League defeat to West Ham on Sunday, but Baraclough said he had reported to camp ready to play.

“He has reported last night [Sunday] and this morning to be okay,” Baraclough said. “Nothing to worry about.”

Evans, 32, missed both of Northern Ireland’s fixtures in September through a combination of personal reasons and injury, and did not play his first game of the season until Leicester’s 5-2 win over Manchester City a little over a week ago.

He was substituted in that match after his calf tightened up, but there had been no further concerns over his fitness until he took the knock in Sunday’s 3-0 home reverse to the Hammers, in which he played all 90 minutes.

Baraclough said there were “one or two bumps and bruises” within his 26-man squad for both the Bosnia trip and subsequent Nations League games against Austria and Norway, but that there were no major issues to worry about.

Northern Ireland captain Steven Davis played only a limited role in Rangers’ 2-0 win over Ross County on Sunday, coming on as an 83rd-minute substitute, meaning he is fresh as he stands to break Pat Jennings’s caps record on Thursday by making his 120th appearance.

“He does the things right leading up to a game. We’re fortunate that he took a rest on Sunday for Rangers,” Baraclough said. “It’s allowed him to have a really good run-up to the game and I expect him to lead the team out.”

Northern Ireland have spent months preparing for Thursday’s fixture, which was originally scheduled for March before the coronavirus pandemic took hold.

The winner will face either the Republic of Ireland or Slovakia for a place in the rearranged Euro 2020 finals, offering Northern Ireland the chance of qualifying for a second European Championships in a row.

“There’s a definite focus on making sure we are in the final come next month to give ourselves a chance to get to the Euros,” Baraclough said. “Players want to be there.

“Players want to experience the feeling of being at a competition that is renowned worldwide now and being on the biggest stage, so there’s no bigger incentive.”

1 Munster beat Glasgow to keep their winning streak going
2 The Offload: Ireland are stuck in no man’s land
3 Every kind of wind imaginable was against Tipperary football - and they came through
4 Mickey Harte is the new Louth football manager
5 Ken Early: Roles have reversed for Guardiola and Mourinho
Real news has value SUBSCRIBE
Crossword Get access to over 6,000 interactive crosswords