Performative actions are not enough to tackle racism in sport

Supporting black players should not be a box-ticking exercise, say Wexford footballers 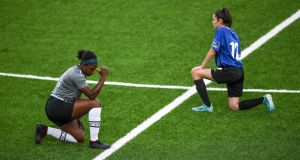 Vanessa Ogbonna of Wexford Youths and Kellie Brennan of Athlone Town take a knee in support of the Black Lives Matter movement ahead of the Women’s National League match. Photograph: Eóin Noonan/Sportsfile

“I wear sun cream at the start of every game and every single time someone asks me why am I wearing it. And I’m like: ‘Cause the sun affects everyone’,” says Vanessa Ogbonna, footballer at Wexford Youths FC.

That one thoughtless question captures the emotional burden black people bear: having to explain their very existence; having to teach the unaware that while something can impact everyone, the consequences often vary. “I know the girls aren’t racist but having to explain it is annoying. Unfortunately that’s just where we are right now. Otherwise all people see is the reaction so talking is more effective,” Ogbonna says.

“I’ve realised that ‘should’ is a very privileged word and a lot should be done but I’ve taken it upon myself to just do the thing,” she adds, even if that thing is repeatedly explaining black people’s skin is also affected by the sun.

Her teammates, though, are willing to listen and happy to learn. It is the broader picture of the Women’s National League and the Football Association of Ireland (FAI), the structures that hold women’s soccer in Ireland in place, that Ogbonna and her teammate, Blessing Kingsley, have questions for. Racism and unconscious bias cannot be tackled by individuals and as we have seen in the men’s game, well-intentioned but toothless movements offer little in the way of substantive support for black players.

Since returning to play, Women’s National League players have unanimously taken a knee for the Black Lives Matter (BLM) movement, a welcome move to show their intention. But to players it feels performative, designed to keep the FAI out of (further) public opprobrium, rather than substantially tackling racism within football.

“Someone could still take the knee with the team and not support the movement,” explains Kingsley. “It’s obviously great that the league is showing support for anti-racism but I don’t want it to just be support like the box is checked, move on. We need to know that, as a player, if something happened [for example, being called something racist at a match], I need to know that I’d have the league’s support, the referee’s support. At the moment, I wouldn’t be confident about that.”

As it stands, the individuals who feel the sting of racism and unconscious bias have to lead the charge on dealing with it, unable to trust the governing bodies or match officials.

“Look, it’s a double-edged sword,” says Ogbonna. “Our coach told us we were going to do it [kneel for BLM] but there was no opportunity to raise questions on either side or have a discussion about it, we were just told. Surely, it should be talked about before we do it? People should have the option of asking if it makes sense, what if someone didn’t want to do it?”

Being told that they’ll be taking the knee – and the implicit message behind that – is encouraging but the action impacts people differently. As Ogbonna tweeted: “Not just a couple seconds. It’s my life.”

Putting up a banner is all well and good but the people you’re trying to include have to be able to see the banner.

“They can’t treat me and a white person the same because we’re not equal. They have to understand our separate needs. It takes intentional effort,” she says. “It is a form of white privilege, that they just told the team and everyone agreed and did it. This affects me differently to my teammates. We’re the only team in Ireland with two black girls on it and no one said anything to us.”

According to Kingsley, a lot of the problem comes down to representation: who is playing the game; who makes the decisions? “When you look at me and Vanessa, we’re the only black girls in the whole league. That lack of representation makes you disheartened.”

Ogbonna agrees: “If soccer isn’t actively promoted to minorities, it’s hard to break the mould.” Having received a scholarship from Oakland University in Michigan in the United States, Ogbonna is painfully aware that “it’s not typical for a girl like me to be as far up in football as I am”.

Similarly, Kingsley is due to start a soccer scholarship at the University of Southern Mississippi in January 2021. “For any girl in the country, there’s a lack of representation, but when you talk about minorities the numbers worsen.

“Every team will say they’re inclusive and will take the knee, but you have to do something to make yourself inclusive. Putting up a banner is all well and good but the people you’re trying to include have to be able to see the banner. Are they even in the room?”

She points to the direct provision centre in Tramore, Co Waterford – where she’s from – as an indicator of successful engagement. “A couple of sports entities became very involved with the community there so the teams are very diverse. They helped to cultivate the talent.”

Although the issue is multifaceted, anyone, whether they are employed in the FAI or at club level, can make a difference. This, acknowledges Ogbonna, won’t always go smoothly: “You might fail but you have to try, it’s the willingness. If it’s part of your club ethos you have to try, if you’re a team, person or organisation and saying you care about inclusion whether it’s minorities, women, disabilities, whoever, you are in the position of being able to do it, you have to extend your hand and try.”