Everton hoping Delph can improve their team and dressing room 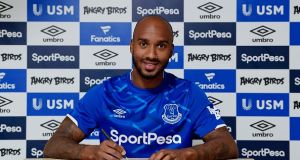 Everton have completed the signing of Fabian Delph from Manchester City with Marco Silva convinced the 29-year-old can play an influential role on and off the pitch at Goodison Park.

The England international had one year remaining on his City contract but wanted more regular first-team football having made 20 appearances in their treble-winning season. Everton will pay an initial £8.5m for the midfielder, rising to £10m with add-ons. The former Leeds and Aston Villa player has signed a three-year deal at Goodison.

Delph joined his new teammates at their pre-season training camp in Verbier, Switzerland, on Monday and insists he retains an appetite for silverware despite leaving the Etihad Stadium.

He said: “The club that I’ve been at has had success, especially in the last two seasons, but over the last four years we managed to win trophies. I wanted to be playing more regularly and the opportunity to come and play for Everton Football Club was too good of an opportunity to turn down.

“I’m hungry. I don’t like losing. I see myself as a winner. I’m at an age now where I am probably one of the most experienced players, so hopefully I can bring that and try to help my teammates here to do better. Ultimately, the goal is to win something. I’ve not come here just to be here – I’ve come here with ambitions to win things.”

At 29, Delph does not fit the profile of Everton signings outlined by their director of football, Marcel Brands, although he has stated that allowances will be made for older, good value targets. Silva, however, is keen to add more dominant personalities into the dressing room and believes an England international with title-winning experience can be an important addition.

The Everton manager said: “When I look to bring a new player into our squad, the first thing I look for above all the other things is quality and Fabian is a player with high-quality. But what they can bring to our dressing room is also important and if you can put those two things together then that can only be good for the club. Fabian is a player that can give us different solutions in our midfield because he can play in more than one position and that is important for us.”