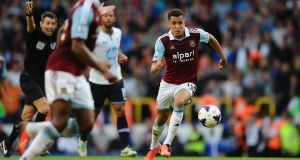 Former Manchester United prodigy Morrison, 26, impressed Blades boss Chris Wilder during a trial after leaving Swedish side Ostersund and has the option to extend his stay at Bramall Lane.

“Ravel is an undoubted talent and we are delighted that we have put together a deal that suits all parties,” said Wilder. “I’ve spoken to a number of people about him and it is clear that he has serious ability.

“We are getting a fantastic footballer with a tremendous pedigree and this is a great opportunity for Rav. We believe we can help him get back to the level he wants to be.”

Morrison progressed through the academy ranks at Old Trafford and was described by Alex Ferguson as the most talented 14-year-old he had ever seen.

But a catalogue of off-field problems prompted Ferguson to sell Morrison to West Ham in January 2012 after he had made only three first-team appearances.

Morrison, the Blades’ fourth summer signing, scored three goals in 18 appearances for West Ham and had loan spells at Birmingham, QPR and Cardiff before joining Lazio.

Despite signing a four-year deal with Lazio, Morrison made only seven appearances.

He returned to QPR for a second loan spell in 2017 and most recently featured for Ostersund in the Swedish top flight.

“He’s done extremely well during his time with us and it was great to have him (on the training camp) in Portugal,” Wilder added.

“It wasn’t about him coming and being on trial because we knew about his abilities.

“Taking him with us was basically getting to know him and what he’s about, what makes him tick and how he integrates with the players.

“Trips like what we have been on are invaluable for that.”