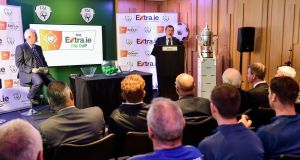 Donal Conway speaking during the Extra.ie FAI Cup first round draw at Aviva Stadium in Dublin. He has been nominated unopposed to retain his position as FAI president. Photo by Sam Barnes/Sportsfile

Sport Ireland chief executive John Treacy seems set to be handed the unenviable task at Wednesday’s meeting of the Joint Committee on Transport, Tourism and Sport of explaining just how it is that the second longest surviving director of the FAI, one who sat through almost every minute of John Delaney’s reign, has somehow emerged as the unopposed “reform” candidate for the association’s presidency.

Shane Ross has already made his feelings on the matter clear in a letter sent directly to Donal Conway. In it, the minister suggests that in running for re-election the retired school teacher has essentially reneged on his commitment to pave the way for real change by departing. He also criticises the process, the appointment of Noel Mooney and the remarkable proposal that the new board have a quorum of just two.

With the FAI’s leadership having been spared a return visit to Leinster House for the moment at least, Treacy’s appearance before the committee will provide several of its most prominent members with the opportunity to remind the public that they are not best pleased either.

Conway, though, is all but assured of extending his stay on the board to 15 years and vice president Noel Fitzroy will get to stick around too if he can fend off challenges from Gerry McAnaney and Paul Cooke, one a current council member representing the armed forces, the other a long time representative of Waterford FC who has already been drafted in at Abbotstown to help with the financial situation

In his opening address, Treacy will tell the committee of the importance he attaches to the recommendations by the Governance Review group being adopted by the association over the next two weekends.

It is hard, however, to find anyone involved in the FAI itself who will predict with any great confidence that the various rule and other changes to be voted upon this and next weekend will get through with required the two thirds majority.

There will surely have been some dismay in Sport Ireland, who met the FAI on Tuesday, with the fact that Conway was nominated unopposed to retain his position.

Clearly, the lack of anyone willing to take a shot at such a prominent member of the old order tends to reinforce the sense that the scale of change underway out at Abbotstown may not end up being quite as dramatic as seemed possible when the association itself came away in disarray from its own appearance before the committee back in April.

Since then, two of the organisation’s key figures, Michael Cody and Eddie Murray, secretary and treasurer respectively, have departed.

But the exit of John Delaney, widely regarded as inevitable, has, at very considerable cost, been the subject of an extended delay and Conway’s insistence that he is the man to deliver the recommended reform has caused consternation. It is not entirely clear whether it is covered by the association’s Disciplinary Rule 11, titled “Provoking the General Public”.

Conway could probably have done with actually having to win an election; it should not have been a huge challenge for an incumbent in a contest to be decided, almost incredibly, by a public show of hands.

As it is, there are ongoing murmurings about his position and the influence he will exert on the selection of the new independent directors as a key member of the new “nominations committee”.

The next few weeks, in any case, will be interesting. More so, certainly, than the last few AGMs with the bumf issued to delegates over the past few weeks providing a timely reminder of just where things stood only last summer in Cork.

There, the minutes recount, Denis O’Brien (who was being made an honorary life president) “outlined how he had the highest respect and regard for the CEO. He admired the fact that he has made it to the top of sports administration internationally. Uefa is another step in that. He gave a special mention,” the minutes continue, “to the FAI honorary secretary Michael Cody”.

O’Brien, we are reminded, also told the story of ringing Delaney to offer his support back in 2008 when, he claimed, the then chief executive had to be reassured by none other than Sport Ireland chairman Kieran Mulvey that the call was not a hoax.

The minutes also underline the challenge involved in achieving the gender balance (at least 33 per cent of each) suggested by the Governance Review Group. It lists the 96 delegates who were entitled to vote with 93 having been men, including two of the three there to represent the women’s football committee and women’s soccer colleges.

1 James Ryan injury could open the door for Ryan Baird
2 Ken Early: Frank Lampard’s problems start at number one
3 Man United in talks with Dortmund over €100m deal for Sancho
4 Freddie Adu: a career proving much ado about nothing
5 Philippoussis wins but ballgirl steals the show
Real news has value SUBSCRIBE
Crossword Get access to over 6,000 interactive crosswords