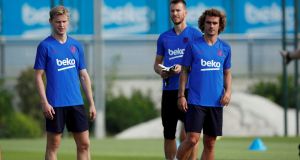 After an underwhelming title race and struggles in Europe, Spain’s top three have all been very busy already. Real Madrid have spent more than £250m to sign Eden Hazard, striker Luka Jovic and defenders Ferland Mendy and Éder Militão, along with Brazilian forward Rodrygo, who arrives after agreeing a move last summer. The sale of fringe players like Mateo Kovacic has helped offset the outlay – but there may be more to come.

Real Sociedad have made some intriguing buys, bringing in Martin Ødegaard on loan and signing forwards Alexander Isak (Dortmund) and Portu (Girona). Juanmi leaves the Anoeta for Betis, who have also sealed a permanent deal for PSG playmaker Giovani Lo Celso. Valencia have done the same with winger Denis Cherysev, and won the battle for Celta Vigo striker Maxi Gomez. Santi Mina goes the other way, with Denis Suárez joining him.

Scottish forward Jack Harper is among Getafe’s cut-price signings as they gear up for Europe. Eibar have been among the busiest teams, signing nine players and letting six leave. Valladolid have brought in forwards Sandro and Enes Unal on loan, while Alavés have snapped up Lucas Pérez from West Ham, and Newcastle’s Joselu. Promoted Real Mallorca have reinforced with seven signings and Granada have landed veteran striker Roberto Soldado from Fenerbahce.

It is the end of an era at Bayern Munich, with Arjen Robben retiring and Franck Ribéry also departing. The German champions have reinforced in defence, signing French World Cup stars Hernandez and Benjamin Pavard long before the window opened. Teenage striker Fiete Arp joins from Hamburg but other attacking targets – including Manchester City’s Leroy Sané – have so far proved elusive.

Borussia Dortmund moved fast to bring in defender Nico Schulz and attacking talents in Julian Brandt and Thorgan Hazard - all from rival Bundesliga clubs - before springing a surprise by bringing Mats Hummels back from Bayern. Leverkusen lost Brandt to Dortmund, but have signed PSG winger Moussa Diaby and Hoffenheim playmaker Kerem Demirbay as they prepare for a Champions League return.

Juventus have reinforced their squad while still making a profit – a frightening prospect for Italy’s chasing pack. Aaron Ramsey and Adrien Rabiot arrive as free agents, while Gianluigi Buffon returns after a year at PSG. Defenders Wesley, Merih Demiral and Cristian Romero have also joined, with the latter going back to Genoa on loan.

Bologna have spent £40m so far this summer, paying off loan-to-buy deals and recruiting Club Brugge defender Stefano Denswil, plus Chievo’s Gambian winger Musa Juwara, who continues his Serie A dream after arriving in Italy as a refugee in 2016. Elsewhere, the three promoted sides – Brescia, Lecce and Verona – have made 22 signings between them already.

Rennes have paid £13.5m to sign Senegal forward M’Baye Niang permanently, and £9m for Angers winger Flavien Tait. Nantes have signed promising keeper Alban Lafont on a two-year loan from Fiorentina, while Toulouse have spent £3m on Greek forward Efthymois Koulouris, who led PAOK to the title last season. The final word goes to Marseille – the only club across all four leagues who are yet to sign anyone at all this summer.

1 College football turns blind eye to Covid-19 by risking players' health
2 In turmoil on and off the pitch: Where did it all go wrong for Barcelona?
3 Limerick’s Shane Dowling forced to retire at 27
4 Rugby impasse continues as no deal reached in fourth round of IRFU salary talks
5 The Best Of Times: Harrington stares down Garcia in epic Claret Jug battle at Carnoustie
Real news has value SUBSCRIBE
Crossword Get access to over 6,000 interactive crosswords