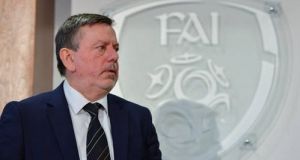 Dónal Conway: he is the only person to be nominated for the role of FAI president. Photograph: Getty Images

The Football Association of Ireland (FAI) has robustly defended the right of its outgoing president Dónal Conway to continue in his role for a new term in the face of a demand by Minister for Sport Shane Ross that he withdraw his nomination.

Mr Ross on Tuesday wrote to Mr Conway accusing him of reneging on a promise that the entire board would step down at the FAI’s agm on July 27th in the interests of renewal and good governance.

Mr Conway is the only person to be nominated for the role of president. The association’s vice-president, Noel Fitzroy, has also been nominated for another term in his role, but he faces competition from two other contenders.

In the strongly-worded letter to Mr Conway, Mr Ross asked him to withdraw his nomination. He said Mr Conway’s effective re-election as president was a “reversal of your promise to bring reform to the FAI under a new leadership”.

However, in a detailed statement on Tuesday night the board of the FAI rejected Mr Ross’s demand. It referred to a report from an independent governance review group for the FAI and Sports Ireland, which recommended that at least one, and no more than two, current members remain in situ.

It quoted from the report of the review group which said that to avoid “serious risks where everyone leaves at once, at least one member, or possibly a maximum of two members, might consider putting themselves forward for positions on the interim board”.

The statement continues: “In accordance with the report, two members of the current board have been nominated by agm members to stand for the positions of president and vice-president.”

The FAI also takes issue with the contention by Mr Ross that it intends to reduce the quorum for board meetings to two. And it disputes the Minister’s assertion that it is not in regular contact with the governing body for sport, Sports Ireland.

“We have met with them on a number of occasions, as recently as today and last Friday,” it says.

1 Rory McIlroy puts integrity ahead of glory in US PGA second round
2 Buttler and Woakes drag England from the brink to set up thrilling Pakistan win
3 Frustration for Lowry and McIlroy as Li leads at US PGA
4 From Maestro to Mister: Andrea Pirlo named new Juventus boss
5 Sene Naoupu turning mind back to rugby after health scare
Real news has value SUBSCRIBE
Crossword Get access to over 6,000 interactive crosswords