Six of the worst: Ireland’s most galling defeats 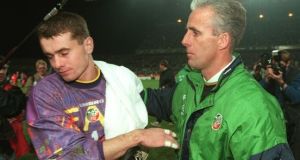 A dejected Shay Given and Mick McCarthy after Ireland’s 2-1 defeat to Belgium in Brussels. Photograph: Billy Stickland/Inpho

Ireland’s 5-1 defeat to Denmark on Tuesday night was galling for a number of reasons.

Most obviously - it means there will be no World Cup appearance next summer. It will now be at least 2022 before Ireland can appear at the tournament again - and even if they manage to qualify, a trip to Qatar is unlikely to be much fun.

The manner of the loss was also particularly disappointing, with Martin O’Neill’s hapless side rolling over and waving the white flag as Christian Eriksen wreaked havoc at a sodden Aviva Stadium.

But while the result might sting the morning after the night before, soon the dust will settle and the rebuilding process will begin.

After all, it’s not exactly the first time Ireland have suffered a defeat of such magnitude - and it certainly won’t be the last.

Here’s a selection at some of Ireland’s heaviest and most gutting defeats - a reminder that maybe it’s not so bad, after all.

Tuesday night was not the first time Denmark have shattered Irish dreams. Indeed, they travelled to Dublin in 1985 with a place at the following year’s World Cup on the line. Ireland got off to a dream start with a Frank Stapleton goal after just six minutes, but a talented Danish side then proceded to run riot at Lansdowne Road (sound familiar?) - with Michael Laudrup among the scorers. The Danes made it to the knockouts in Mexico, while the defeat prompted a sea change in Irish football. Manager Eoin Hand departed soon after, with Jack Charlton taking over.

Ireland headed into just their second ever fixture against Northern Ireland needing a win to keep their slim hopes of reaching the 1980 World Cup alive. A win over the North, followed by victory over group leaders England, would see them book their place in Italy. However, a Gerry Armstrong goal consigned them to a 1-0 defeat at Windsor Park - and a subsequent loss to England meant Johnny Giles’s side finished third in Group One.

A trip to South America in May, with a number of your first choice players absent because of the Falklands War, to play a Brazil side limbering up for the 1982 World Cup - what could possibly go wrong? Manager Hand has since called Ireland’s 1982 trip an “absolute circus,” and it resulted in the heaviest defeat in Irish history - a 7-0 trouncing at the hands of Falcão, Zico, Sócrates and co. The nadir of a shambolic trip.

Ireland were bidding to make it to a third World Cup in a row when they took on Belgium in the playoffs in 1997. The opening leg at Lansdowe Road ended in a 1-1 draw, meaning Ireland had to score in Brussels. Mick McCarthy’s side went 1-0 down in the first half but Ray Houghton - with what would prove to be his final Irish goal - equalised in the second half. But with 20 minutes to go an irish throw-in was overturned and the hosts pounced, with Luc Nilis sending his side to France.

Not a defeat, but a result which really sticks in the craw. Having lost 1-0 in Dublin, Ireland beat a dysfunctional and combustible French side 1-0 over 90 mintues at the Stade de France - sending the playoff to extra-time. The game was still in the balance when Thierry Henry broke the hearts of a nation, controlling Florent Malouda’s free-kick with his hand before squaring the ball to William Gallas who bundled it home. Ireland have missed out on many tournaments due to incompetence but it was the injustice of this which rally rankled.

Martin O’Neill might have failed in his bid to guide Ireland to a first World Cup since 2002, but he has provided some great moments - including taking four points off world champions Germany during the Euro 2016 qualifiers. Ireland were also grouped with Germany in World Cup 2014 qualification butdidn’t fare quite as well, losing both games with an aggregate scoreline of 9-1. That included a 6-1 thumping at the Aviva Stadium, with Marco Reus and Toni Kroos helping themselves to a brace each as Ireland delivered one of the more abject performances of the Giovanni Trapattoni era.