Robbie Brady to give his all for Ireland and Stephen Kenny

‘Passionate’s the word. I know how much this job means to him’ 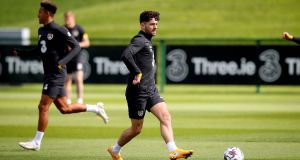 Robbie Brady during an Ireland training session at Abbotstown on Monday ahead of the trip to Bulgaria. Photograph: Ryan Byrne/Inpho 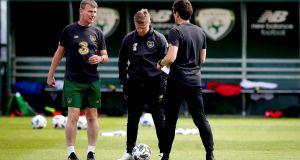 After the couple of seasons he’s endured, with a string of injuries resulting in him seeing a lot more of Burnley’s treatment room than game time, Robbie Brady is due a change in fortune. And while the summer just passed is one that most would like to forget in a hurry, for the Republic of Ireland midfielder it provided a few pick-me-ups along the way that have him in confident form going in to the Nations League games against Bulgaria and Finland.

Burnley’s decision back in May to exercise a 12-month option on his contract, which was due to run out in June, was no small boost. So, instead of the grief of having to find a new club, bearing in mind his injury record, he can now look forward to another season with the Premier League side he joined in January 2017 for a then record club fee of £13 million from Norwich City.

And while he’s reluctant to tempt fate, he says he feels “fit and well” having returned to action post-lockdown, coming on as a substitute in the last three games of Burnley’s campaign in July, and has enjoyed a trouble-free pre-season.

Most encouraging of all, he says, were the supportive words of his new international manager Stephen Kenny, who, when he spoke to the media on taking over from Mick McCarthy in April, name-checked Brady, describing him as Ireland’s “most creative player” before his injuries struck, and talked of his determination to help him rediscover that form.

“He’s been great with me, from the first phone call I’ve had with him,” says Brady, who has 46 caps to his name. “He’s shown great confidence in me and has reassured me of my own ability. It definitely helps after having a bit of a sticky period over the last couple of seasons. I wasn’t playing nearly enough football. I have a full pre-season done now – well, the best pre-season you could have done under the circumstances – and I feel good coming in to the week.”

“It’s great to hear when someone goes in-depth about what you’re good at, you know they’re not making stuff up on the spot. And I’ve had a few in-depth conversations with him, he was saying I am more than capable of playing at the level I’ve shown before and he was looking forward to helping me do that. So yeah, it’s nice to hear those things and I’ll be giving it my all for him and for the rest of the lads.

“I haven’t reached the heights I wanted to since Euro 2016. I felt as if I had a really good season leading in to that tournament, then a bit of a slow start at Burnley and then I picked up an injury. When I came back I expected to be as good as I was before, but it’s a long process, you have to get your head around that. I haven’t had enough football to get me back to where I need to be, but I’m fit and sharp now and I’m ready. I still feel there is a lot more ahead of me. I think it’s going to be a fresh start for myself, so I’m excited and looking forward to it.”

Having made his debut under Giovanni Trapattoni eight years ago this month, going on to play for both Martin O’Neill and Mick McCarthy, the 28-year-old Dubliner is now about to begin life under his fourth international manager. And after those early chats with Kenny, he has no doubt about his passion for the job.

“Passionate’s the word. From the conversations I have had with him, I know how much this job means to him, and he knows how much it means to us. And it’s great to see that passion, the lads will buy in to it. It’s the same with Duffer and Keith [coaches Damien Duff and Keith Andrews]. I’m a massive admirer of Duffer, getting to work with him is excellent. Anything he has for me I’ll be taking on board, the same with Keith. I’ve been massively impressed with how they get their points across, how they speak, how in depth they go in their sessions.”

“We’ve not had the best of times over the last couple of years with results and performances and the manager is looking to change that and put his stamp on it. He has reiterated how important it is, what it can do for us, not just as a team but as a country. Everyone enjoys it when we are performing well and getting to these major tournaments. We’ve got a great opportunity now and it is inspiring for myself and all the lads. Really excited about the future.”